Lecce vs Salernitana – After losing to Hellas Verona 2-0 in their previous Serie A match, Lecce will be seeking to improve on their performance here.

In their last six games, Lecce has scored eight goals under Marco Baroni. Six goals have been scored against them in those identical contests, which is the equivalent number.

After losing to SSC Napoli in their last Serie A match, Salernitana and their fans who came to watch will be hoping for a better result this time.

Salernitana had 26% of the possession in that game and 5 shots on goal, none of them successful. Napoli had 9 shots in total, 2 of which were on goal. SSC Napoli scored with Giovanni Di Lorenzo (45′) and Victor Osimhen (48′).

The Salernitana defense has been consistently bad, as shown by the fact that they have let in a record 18 goals in just their last six games.

They must obviously notice an improvement in this undesirable aspect of their performance.

Looking at their previous head-to-head matches dating back to 04/01/2014 reveals that Salernitana has been disappointed by these matches.

Lecce has just done better than them, beating them in 67% of the games they’ve played against each other. As a result, they have failed to win any games at all.

During those games, the two teams combined for 17 goals, with Giallorossi scoring 11 and I granata scoring six. That equals 2.83 goals per game on average.

The last league game between these two teams was on September 16, 2022, on Day 7 of Serie A. Salernitana beat Lecce 1-2.

On that occasion, Salernitana had 57% of the possession, and 2 of their 8 shots on goal were successful.

Lecce had 13 shots total, only one of which was on goal. Strefezza (83′), Assan Ceesay (43′), and Joan González all scored goals. Daniele Doveri officiated the game.

We think that Lecce will have a lot of chances to score and make good shots on goal.

Salernitana, on the other hand, will have a difficult time reaching the net themselves, but we believe that it is highly likely that they will succeed in scoring in this situation as well.

Looking at the bookies’ prices on the 90-minute result market, staking on Lecce is best priced at 1.9, a wager on a draw is 3.52, and taking a punt on victory for Salernitana comes in at 4.12. Those are the best market prices being offered as of now. 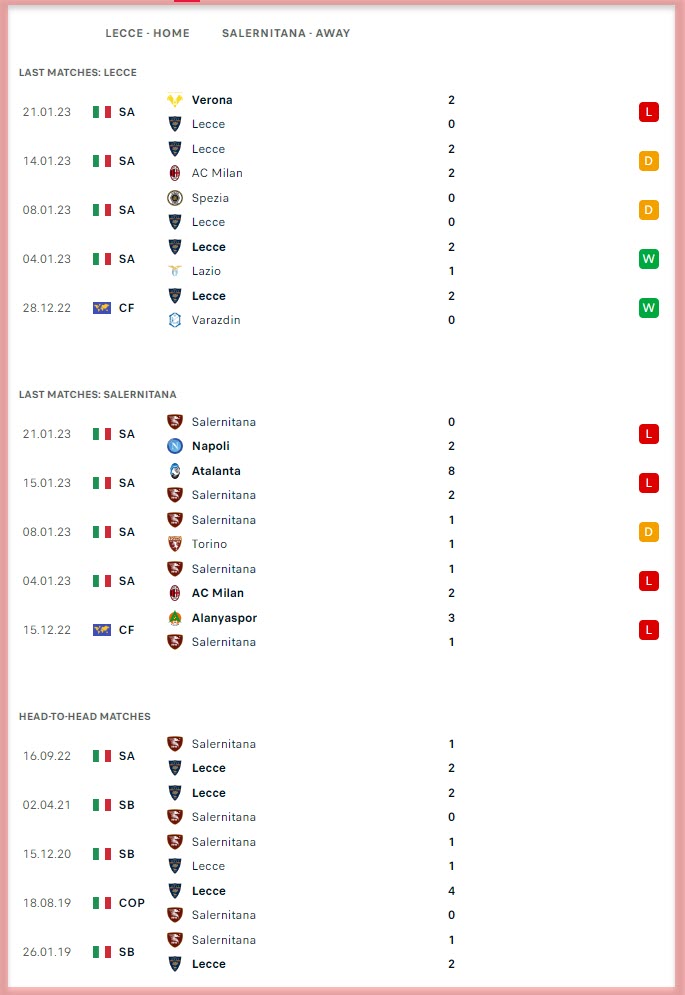