KuPS vs Young Boys -Kups held the top spot in the league table at the conclusion of the regular season in the top division of Finland the year before.

In the Championship round, though, they lost control of it. Young Boys, on the other hand, are coming into this match in great shape and are prepared to dominate on Thursday.

They compete in the coveted Swiss top division and have recently established themselves as one of the top groups there. They have a long run of excellent performances, and they are scoring frequently.

In fact, the majority of their most recent contests ended with victories for them. They have also recently had a strong run on the road, which merits mentioning.

Meanwhile, Kups have recently been fairly unreliable and have been regularly allowing goals to be scored. There is no doubt that they will be the underdogs on Thursday at the Vare Areena. Expect Kups to win on Thursday based on how things currently appear.

Kps had lost their most recent game and allowed two goals during the course of the full game. Also keep in mind that they had lost 7 out of their previous 13 games combined.

As time went on, they also failed to maintain a spotless record in their previous two home games. The Young Boys, on the other side, are now on a lengthy 15-game unbeaten streak.

During that time, they also went on a 4-game winning streak and another 2-fixture winning streak. Keep in mind that they have scored three goals or more in three of their previous five games combined.

Additionally, they are on a 3-match losing streak away from home and have only lost three times since November. Given these findings, it is anticipated that Young Boys will soon score a convincing victory this Thursday. 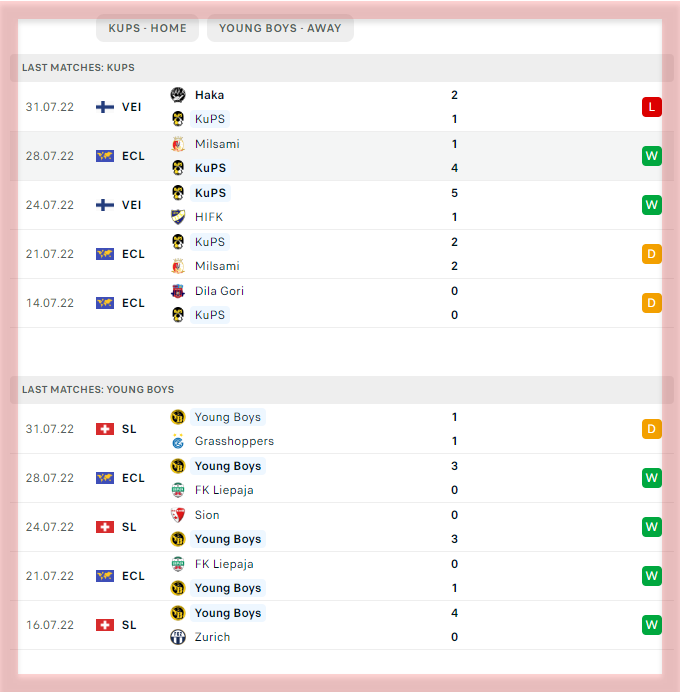