Harrogate vs Sutton – Preview And Prediction

Harrogate vs Sutton – Sutton‘s chances of getting into the safe zone are still alive because they are only one point behind it. With one game left in the season, they will be motivated enough to get a three pointer with the help of home advantage, and they will be able to do it.

Sutton lost 1-4 to Bradford City when they played at home in the league. Their second defeat in the last six league games. Such a recording isn’t good when you want to get into the safe zone. Since they should not count that,

Meanwhile, Harrogate hasn’t done very well this season. They ended up in a place outside the top half of the table because their run changed so much. Their defense is so bad, but their offense is still going strong.

There was still a lot of disappointment for Harrogate, but they did their best to show some positive signs in the league recently. If they win today, they’ll make it three wins in a row in the league.

There was a 1-0 victory for Sutton in the reverse match. When Sutton and Harrogate have played against each other in the past, Sutton has won each time. It worked for both teams to score in three of their total six h2h meetings.

In the past, Harrogate hasn’t done very well at home. They haven’t won in eight of the last 10 league games at home.

On the other hand, Sutton are also having a bad time on the road. However, they haven’t lost in 5 of the last 10 league games when they’re away from home.

On top of that, Sutton have a better record in this head-to-head match-up in the past few years. Because of this, we are betting on them to win this game and stay alive until all the teams in League Two finish their last games.

Harrogate vs Sutton – Head To Head 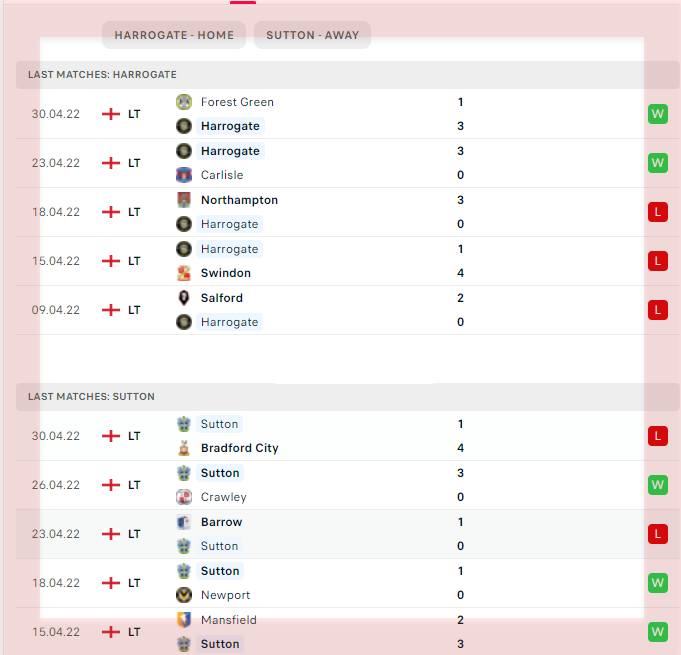