Fortuna Dusseldorf vs Darmstadt – After a 6-0 thrashing of relegation-threatened Erzgebirge Aue last weekend, Darmstadt moved into second place in the 2. Bundesliga rankings.

With only two games remaining, they took advantage of Werder Bremen’s surprise 2-3 home loss to Holstein Kiel to draw level on points with Die Werderaner (Darmstadt has a six-goal advantage).

The team headed by Torsten Liebnerknecht will face Fortuna Dusseldorf in Gameweek 33 at Merkur Spiel-Arena on Friday afternoon.

With a win tonight, they will control their own destiny in terms of automatic promotion ahead of the final day matchups next weekend.

Obtaining one, however, will be a significant challenge for the guests. Fortuna Dusseldorf have seen a major improvement in form in recent weeks, despite having nothing but pride to play for for a long time.

Daniel Thioune’s club has now gone eleven games without losing in the 2. Bundesliga. Recently, they’ve been particularly inspired in the last third.

In the last two games, he has scored five goals against Dynamo Dresden (a 2.2 draw) and Heidenheim (a 1-3 win at home).

Darmstadt will go against the grain today, since they have a poor record against Fortuna Dusseldorf, who have won 8, drawn 2, and lost only one of the previous 11 meetings.

Fortuna Dusseldorf will enter this match on the basis of three consecutive victories over Darmstadt, a run in which they scored eight goals.

In each of the past three head-to-head meetings between the two teams, the Over 2.5 goals FT& Both Teams To Score bet paid out.

In four of the last five league games, Fortuna has scored at least two goals. Darmstadt has done the same in each of their last five 2. Bundesliga games. The last three head-to-head meetings have all been in goal fests.

The main betting option here is to take the 1.90 odds offered for the Over 2.5 goals FT & Both Teams To Score choice.

Knowing that Fortuna Dusseldorf has won four and drawn one of their last five home encounters with Darmstadt, we favour the home win bet at 3.50 odds. 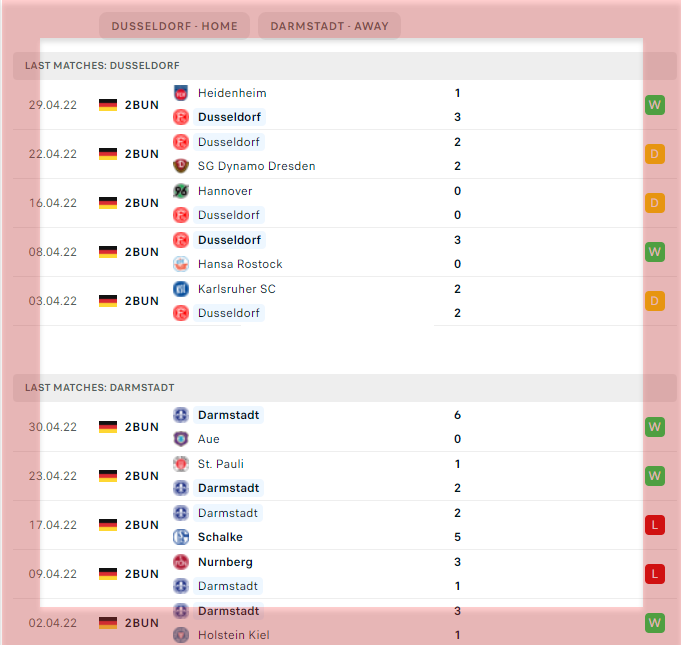