Fluminense vs Flamengo – Preview, and Prediction

Fluminense vs Flamengo – Fluminense will host Flamengo in the opening match of Brazil Serie A round eight this week. These two sides will lock horns at Maracanã this Sunday.

Fluminense is in the 7th slot on the standing with 11 points from 7 games. Despite losing and drawing two games apiece, they both won three games.

The hosts presently leads the Copa Sudamericana promotion slot and the hosts have seen netting frequently but they tend to concede more of the same.

A repeat of the Serie A win over Fortaleza is what the hosts are hoping for. Their recent results show that the Fluminense defense deserves a lot of credit because they have allowed only three goals in their last six matches.

Flamengo, on the other hand, sits in 14th place with 9 points. They won and lost twice apiece in the seven games they played, while drawing three times. Only seven goals have been scored by them so far, which has been a major contributing element.

Flamengo comes into this meeting following on from a 2-1 Copa Libertadores triumph against Sporting Cristal in their most recent game. In their last six games, they’ve allowed only four goals, the lowest total of any team in the Premier League.

Fluminense have won four of their past five h2hs and are unbeaten in that span. Only once in their last nine matches did Flamengo win. In three of their last five games, only one team scored. They drew 1-1 in their most recent meeting at the Campeonato Carioca.

Fluminense hasn’t lost to Flamengo in three league meetings prior to this one. However, they are winless at home this season. Flamengo should be favored to win this Sunday’s game, since they have only lost one of their previous eleven road games.

Flamengo, on the other hand, has gone six league games without a win on the road. There have been no defeats on the road in any of their four outings thus far in various tournaments.

Fluminense vs Flamengo – Head -to -Head 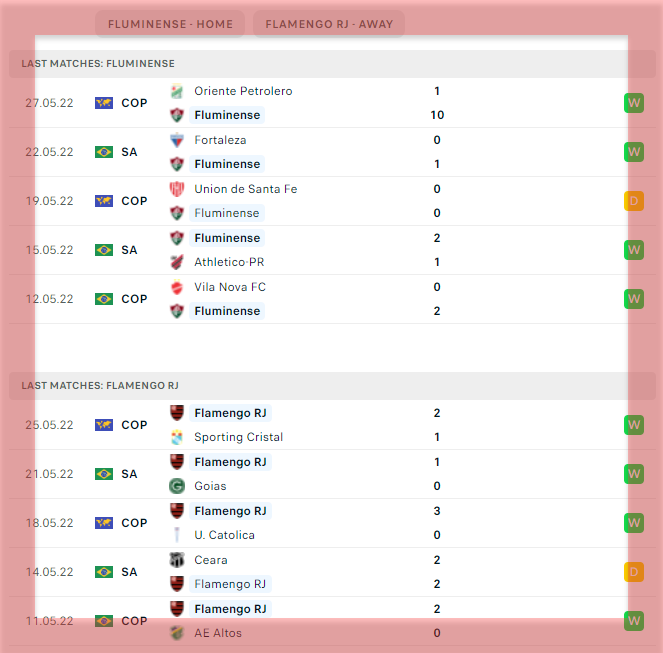