Espanyol vs Barcelona – Barcelona will be looking to make it three straight La Liga triumphs when they face Catalan rivals Espanyol in the Barcelona derby this evening at RCDE Stadium.

The visitors are presently fourth in the rankings, two points behind Real Betis in third place with a game in hand, while Espanyol are 13th, three points behind 10th-placed Celta Vigo.

Oscar Gil will be out for Espanyol this weekend due to suspension, while Fernando Calero is a doubt for the hosts due to injury.

However, the White and Blues will be buoyed by the return of leading goalscorer Raul de Tomas, who is available after serving a ban.

Tonny Vilhena scored in the defeat against Athletic last time out and is anticipated to keep his spot in the final third of the field, while Javi Puado and Oscar Melendo are also set to stay.

Barcelona will be without Dani Alves due to suspension, while Samuel Umtiti, Ansu Fati, Sergi Roberto, and Alejandro Balde are all out due to injury.

Meanwhile, Clement Lenglet, Memphis Depay, and Eric Garcia are all doubtful for the away team.

Sergino Dest is expected to take Alves’ place at right back, but Aubameyang may have to wait for his complete debut, after Gavi, Ferran Torres, and Traore shined as a front three against Atletico Madrid.

Apart from Alves, the team that entered the field for the first whistle against the reigning champions may be the same, with Frenkie de Jong in midfield alongside Pedri and Sergio Busquets. 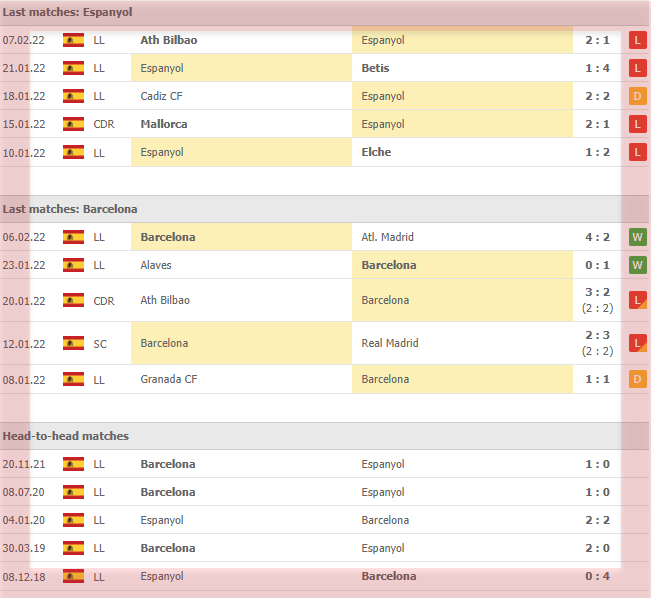 Matches between these two teams are always exciting, and this weekend’s match promises to be no exception. Espanyol will like their chances of causing issues, especially with De Tomas back in the lineup, but we anticipate Barcelona to continue their winning streak in La Liga.