Emmen vs Volendam – preview and prediction – team news, and lineups

Emmen vs Volendam – Volendam and Emmen are tied for first place in the Eerste Divisie, each with over 60 points. The Nieuwe Oranje recently suffered their second defeat of the season, following an incredible 16-game unbeaten run across all competitions.

The hosts have won back-to-back league games and have one of the league’s best defensive styles of play. They meet this Monday at De Oude Meerdijk for the 27th Round of the Eerste Divisie, despite being only two points apart and still in the Eredivisie promotion list.

Volendam leads the Eerste Divisie with 63 points from 29 games. They won 18 games in the league, drew nine, and lost only twice. They have scored 64 goals while conceding 36, demonstrating their excellent attacking front but indicating a need for improvement on the defensive side.

The table leaders were defeated by Excelsior by a score of 2-5 in their previous match. Wim Jonk’s men have found the back of the net 11 times in their last six games. The total number of goals scored against them during those matches comes to eight.

Emmen, on the other hand, sits just below them in second place on the table with 61 points. They won 19 of the 29 games they played, while drawing four and losing six others.

The hosts have won their last two games against Jong PSV and Jong Utrecht. Dick Lukkien’s team has scored a total of 11 goals in their last six games, for an average of 1.83 goals per match.

Despite the fact that the table toppers have gone unbeaten in their last 17 league away games, their previous defeat adds a lot of pressure. We believe a home win is possible because the hosts have won 71% of the games played at De Oude Meerdijk this season. 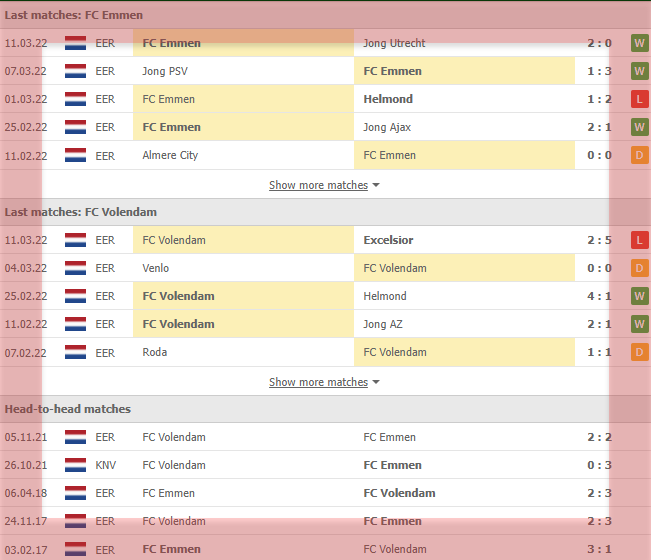