Crawley vs Grimsby – Following a 2-2 draw with Newport County in League Two, Crawley Town enters this game. Dominic Telford (36′, 67′) was the only player from Crawley Town to have his name on the scoresheet. For Newport County, goals were scored by Offrande Zanzala (92′) and Matty Dolan (83′).

Over their previous six games, Crawley Town under Scott Lindsay have scored six goals. On the other hand, they have given up nine goals in those same contests.

Grimsby Town will be trying to turn things around after losing to Swindon Town in their previous match in League Two.

We’ve seen goals 20 times in the previous 6 games that Grimsby Town have played, giving each match an average of 3.33 goals, demonstrating their preference for exciting games.

13 of these goals have been scored by rival teams. However, there’s a chance that tendency won’t continue into this match.

Looking back at their previous meetings dating to March 9, 2019, we can see that Crawley Town has won two of these games, Grimsby Town has won three, and there has been one draw.

During those matches, the two teams combined for 19 goals, with 8 goals scored by the Red Devils and 11 by the Mariners. 3.17 goals have been scored on average per game.

Scott Lindsay, the manager of Crawley Town, has a fully healthy roster to pick from, so there are no injuries to worry about ahead of this encounter.

The Grimsby Town manager, Paul Hurst, doesn’t have any fitness concerns at all going into this game because he has a completely injury-free bunch to choose from.

We believe that Crawley Town will find it challenging to score against this Grimsby Town team during the course of the game. We think Grimsby Town will score, and they might also keep a clean sheet.

Turning to the betting odds in the 90-minute result market, a victory for Crawley Town is best priced at 3.4, a wager on the game finishing all-square is 3.36, and putting your money on a win for Grimsby Town will get you 2.16. They are the best prices that can be secured at the moment. 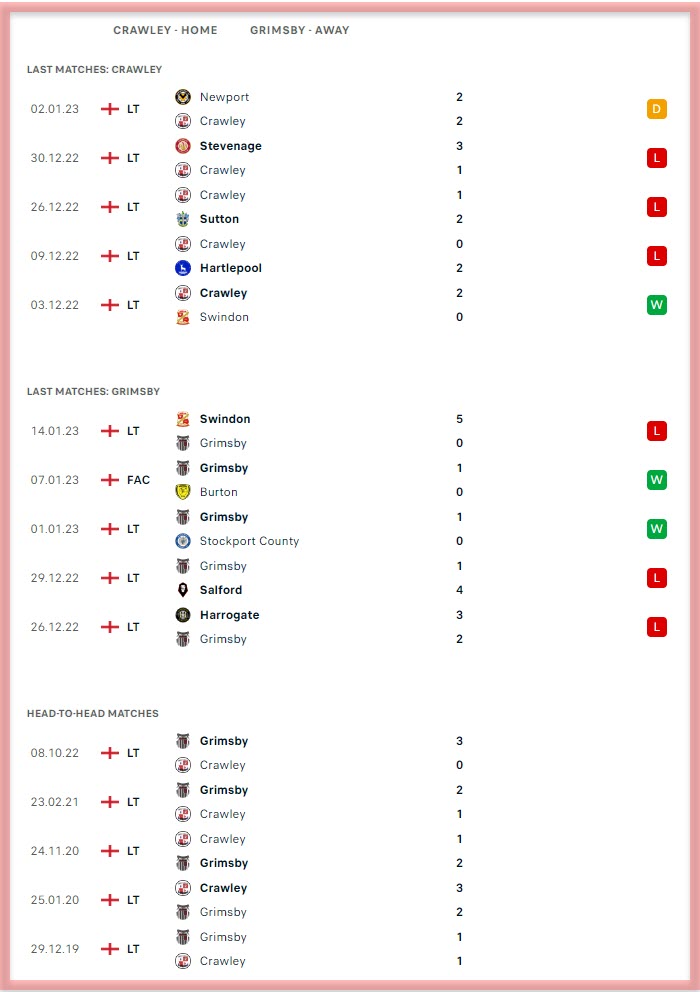