Bosnia-Herzegovina vs Finland – Preview, and Predictions

Bosnia and Herzegovina currently leads the group with 5 points after three matches. They lead second-placed Finland by a point, and the hosts have never lost a game in this group stage.

The teams in second and third position are putting up a good fight and hoping for a mistake. The hosts are coming off a 1-1 draw against Montenegro in their most recent match.

Matches involving them have recently been fairly uninteresting. In their last six games, they’ve scored a total of 6 goals against rival teams, averaging 1 goal per game. Finland, on the other hand, is in second place in the group with four points.

They each won, lost, and drew one game in the group, and they have the same goal ratio as the group’s top scorer, Bosnia. The visitors are level on points with Montenegro, who are below them in the standings.

Finland will be aiming for a better result in this match after suffering a 0-1 setback to Romania in Nations League play last time out. They’ve been outscored in five of their last six games, allowing opponents to score a total of seven goals.

They’ve met six times, with each team winning two games, and both sides have scored in each of their last four head-to-heads. Last week’s reverse match ended in a 1-1 draw.

Bosnia and Herzegovina has lost seven of its last ten home games. In those home games, they have also conceded two or more goals. Their reverse h2h match finished in a 1-1 draw as well.

Finland, on the other hand, has won three of their last five away games in various tournaments. They’ve also won their last three head-to-head meetings with this opponent.

In the World Cup qualifications, the visitors defeated this rival 3-1 in the previous away h2h match. We believe that an away win or a draw is the most likely outcome, considering both teams have drawn two of their last three meetings. 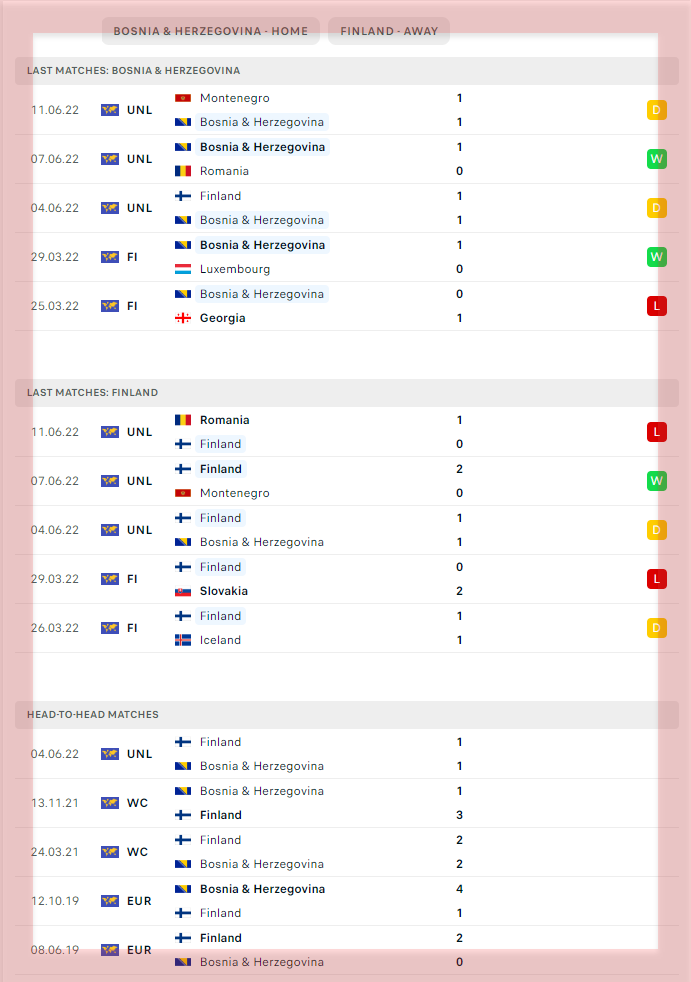