AZ VS NEC – Preview and Prediction

AZ VS NEC – Following their 0-1 Eredivisie victory over SC Cambuur, AZ will be aiming for a repeat of their previous performance. Jordy Clasie (90′) was the only player from AZ listed on the scorecard.

Their most recent outcomes highlight the significant efforts made by the AZ backline. AZ have been frugal, as seen by the fact that they have only scored three goals in their last six games.

But there’s no guarantee that tendency will continue into this game. Prior to this match, AZ had not lost to NEC in the league in their previous two games.

NEC’s most recent match saw them play FC Groningen in the Eredivisie and end in a 1-1 draw. Ibrahim Cissoko was the only NEC player to score (88′). FC Groningen scored through Laros Duarte (75′).

NEC has been scored against in 5 of their previous 6 games, giving up a total of 7 goals, according to their recent performance.

NEC hasn’t exactly been flawless in the back. NEC entered this match with a losing road record against AZ over the previous two league games.

Looking at their previous head-to-head matchups going back to January 11, 2015, we can see that AZ has won 3 of these games, NEC has won 2, and there have been 1 draws.

Over the course of those games, they combined to score 20 goals, with AZ scoring 12 and NEC scoring 8. That equals 3.33 goals per game on average.

The score of the last league meeting between these teams was NEC 1-3 AZ on Eredivisie Match Day 25 on March 6, 2022.

On that occasion, NEC had 50% of the ball in control and 6 of its 13 efforts on goal were successful. Rodrigo Guth (44′) was the lone member of their team to register a goal. 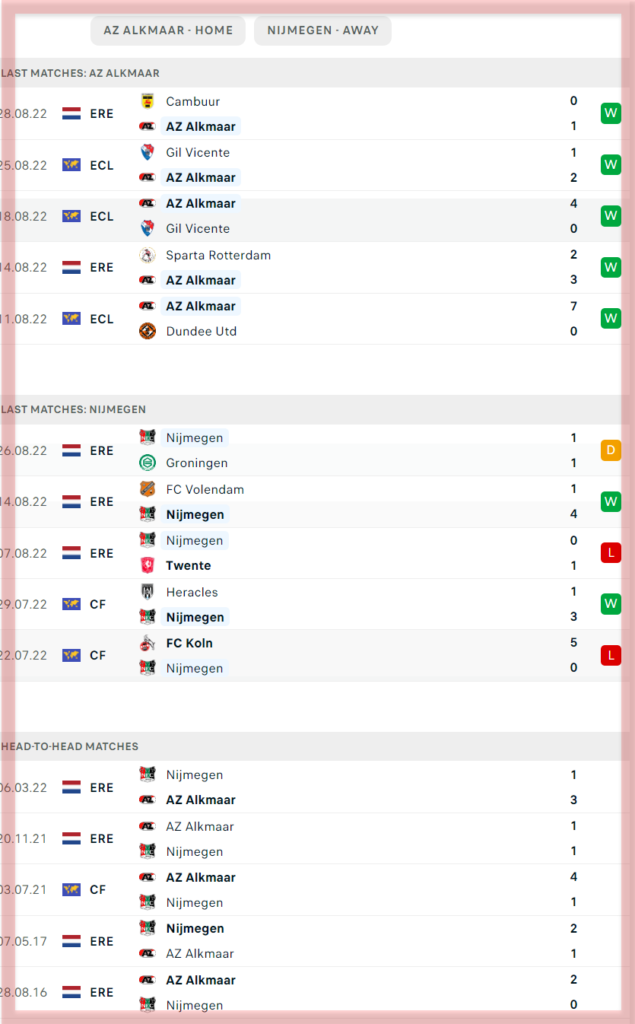