Atalanta vs Olympiacos – preview and prediction – team news, and lineups

Atalanta vs Olympiacos – Atalanta BC and Olympiacos, both vying for a spot in the Europa League last 16, meet for the first time on Thursday in the first leg of their playoff encounter.

The clubs meet in Bergamo after the hosts were knocked out of the Champions League group stage while their visitors finished second in Group D.

Atalanta will play in the knockout round of Europe’s second-tier event for the second time after failing to advance to the last 16 of Europe’s elite competition for the third time in a row, losing their vital last Group F encounter 3-2 at home to Villarreal.

Olympiacos are one of five defending national champions in this month’s playoff round, having been crowned champions of Greece for the 46th time last spring, finishing a staggering 26 points ahead of the Super League runners-up.

Atalanta has added Ivorian winger Jeremie Boga from Sassuolo and Parma’s Valentin Mihaila to their European squad after their exit from the Champions League, while Robin Gosens, Matteo Lovato, and Roberto Piccoli have gone out on loan.

The hosts have also been hampered by the absence of star striker Duvan Zapata, who is expected to be sidelined until at least April, and have doubts about center-back Jose Luis Palomino’s fitness. Aleksei Miranchuk, a Russian midfielder, is also hurt.

After serving a suspension against Juventus, goalkeeper Juan Musso is expected to return to Gian Piero Gasperini’s starting lineup, so deputy Marco Sportiello is dropped to the bench.

Meanwhile, Olympiacos signed Bandiougou Fadiga, Garry Rodrigues, and former Roma defender Kostas Manolas, who rejoined the club from Napoli last month, over the Christmas break. In 2014, the Greece international moved to Rome, where he made 216 Serie A appearances.

Michal Karbownik, Svetozar Markovic, and Ahmed Hassan are among those who have left, but Sokratis Papastathopoulos will continue to lead the defense. The veteran centre-back, who played under Gasperini at Genoa from 2008 to 2010, was a constant presence during the group stage. 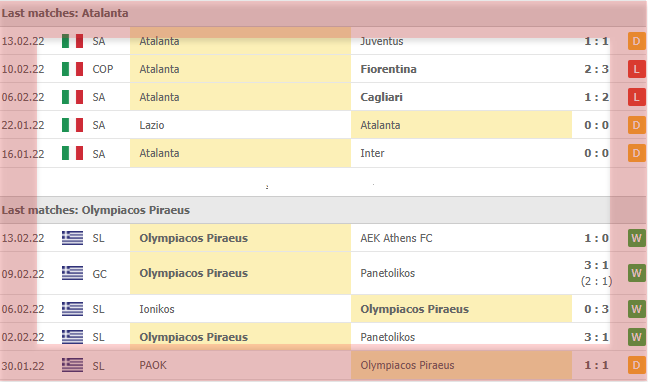