Akademija Pandev vs Lechia Gdańsk – The playoffs are looking up for Lechia now that they’ve secured their place in the next round. Even their most ardent detractors had little reason to question how the first leg ended.

This second leg is all they have to do to maintain their 4-1 aggregate lead. In addition, they are currently enjoying a stellar run of play. They’ve won a lot of games recently, and they’ve been scoring a lot of goals.

Pandev, on the other hand, are in a losing skid and conceding goals at an alarming rate. Furthermore, they’re on a troubling run of form and must overcome a three-goal deficit in this second leg.

They’ll have to go after goals right away, and it’s not clear if their defense will be able to keep up with all the counterattacks that will be unleashed as a result.

The only time these two sides faced off in this current tie was during the first leg. After that, Lechia won 4-1 at home. Akademija Pandev and Lechia Gdask square off. Analysis and Prediction

This is Pandev’s third straight defeat and their fifth in the last six games overall. In all five of these games, they had allowed three or more goals. Lechia, on the other side, are unbeaten in their last four games and have scored a total of 14 goals over that span.

In addition, they have only suffered a road loss once in the last three months and have scored two or more goals on four of their last five road trips. As a result of these observations and the outcome of the first leg, we can expect Lechia to win the second leg. 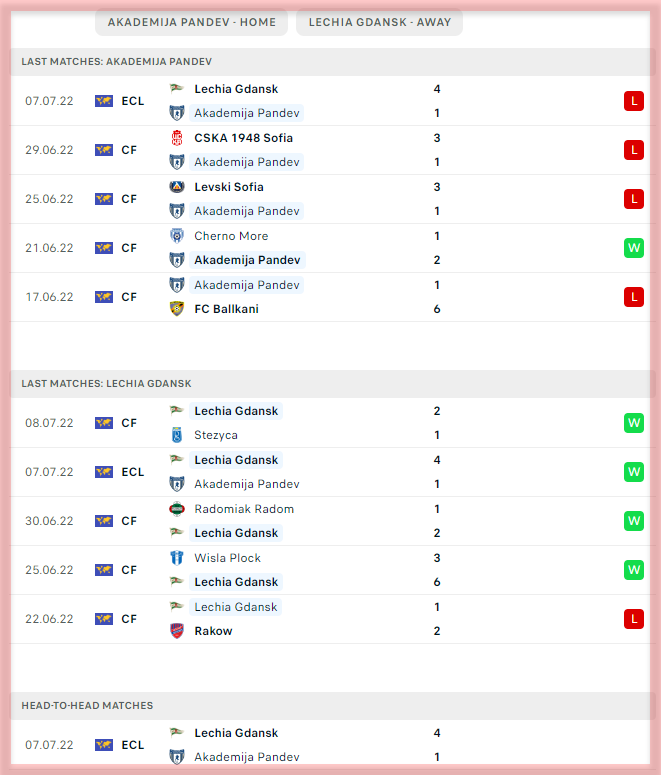