Zalgiris vs Bratislava – Preview, and Predictions

Zalgiris vs Bratislava – The Conference League’s Group H has yet to determine which players will advance to the knockout rounds. As a result, the game between Zalgiris and Slovan in the group stage is anticipated to be intense.

The top spot in the table is presently held by Slovan, who have eight points to their name thus far. Only one team scored more goals than them in the group, and they have only lost once.

They are in excellent form overall and are scoring a tonne of goals in these kinds of games. They are more assured because they are at the top of the standings, and they will undoubtedly want to win this Thursday.

This game day, both teams will take chances and strive for the three points. Expect errors from both sides of the field and anticipate lots of goals as well.

The two sides have only faced off against one another, and the result was a scoreless tie, and in their most recent game, Zalgiris won 6-0 and had a lengthy unbeaten streak. In fact, since August, they have only lost twice.

The fact that they have a protracted winning streak at home dating back to mid-September is also significant. Slovan, on the other hand, have won all of their games since mid-September, with the exception of just two. Additionally, they scored a tonne of goals throughout this period.

Additionally, during the past few months, they were able to put on fantastic performances away from home. As the two clubs compete for the top slot, it appears like Thursday’s game will be a high-scoring encounter. 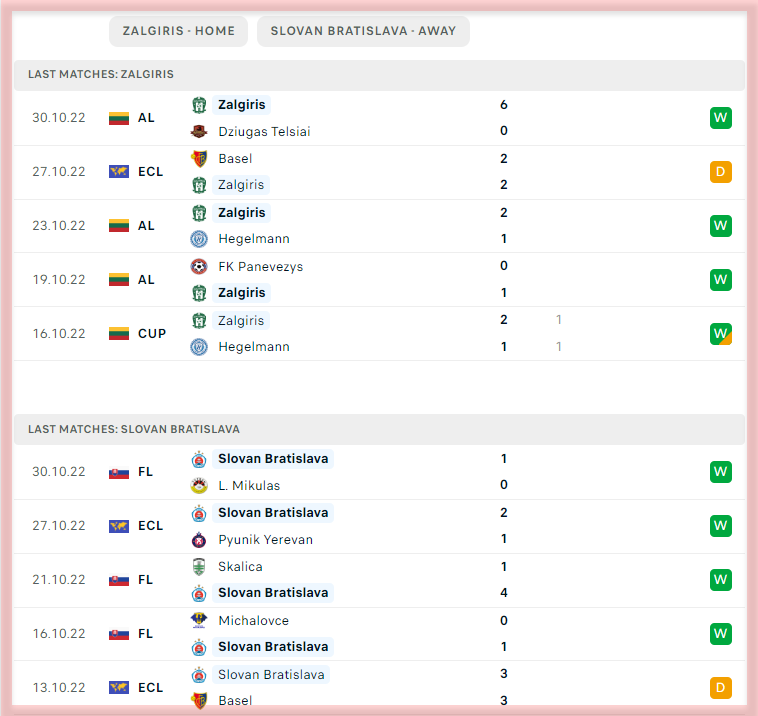