Wrexham vs Grimsby- Preview, and Prediction

Wrexham vs Grimsby – On Saturday afternoon, Wrexham host Grimsby Town in the hope of moving closer to regaining promotion to the EFL. Grimsby Town, on the other hand, enter the National League playoff semi-final in better condition after defeating Notts County in the quarter-finals earlier this week.

Many predicted Wrexham would win both the league and the cup after their strong performance against eventual champions Stockport County earlier this month. However, since May 8, the Dragons have been thoroughly outplayed by Dagenham & Redbridge on the final day of the season, resulting in a second-place finish and a loss to Bromley in the FA Trophy final.

The focus on promotion has meant that the Wembley spectacle has been downplayed to some extent, but Phil Parkinson isn’t delighted with his team’s performance during the last 180 minutes. They have won just four times in nine games since the middle of April, hardly promotion-contending form, and there is no doubt that the stakes have been elevated dramatically ahead of this encounter.

On the plus side, Wrexham haven’t lost at the Racecourse Ground since the end of November, with one of their victories coming against Grimsby by a 1-0 margin. Nonetheless, the Mariners will be more motivated than ever to upset the applecart at the celebrity-owned club, just as they did earlier this week against higher-profile hosts Notts County.

Paul Hurst’s club appeared to be out of the playoffs as they went into extra time losing 1-0, but Gavan Holohan’s last-gasp equaliser was followed by Emmanuel Dieseruvwe’s 119th-minute extra-time winner. After being on the receiving end of an unlikely comeback in their final league game at Eastleigh, Grimsby showed great grit and will go into this match with no fear.

While Wrexham have had more rest ahead of this match, the visitors have all the momentum and will relish the status of underdogs. Nonetheless, we predict the Welsh team to take advantage of their home advantage and win by the odd goal in three at the Racecourse Ground. 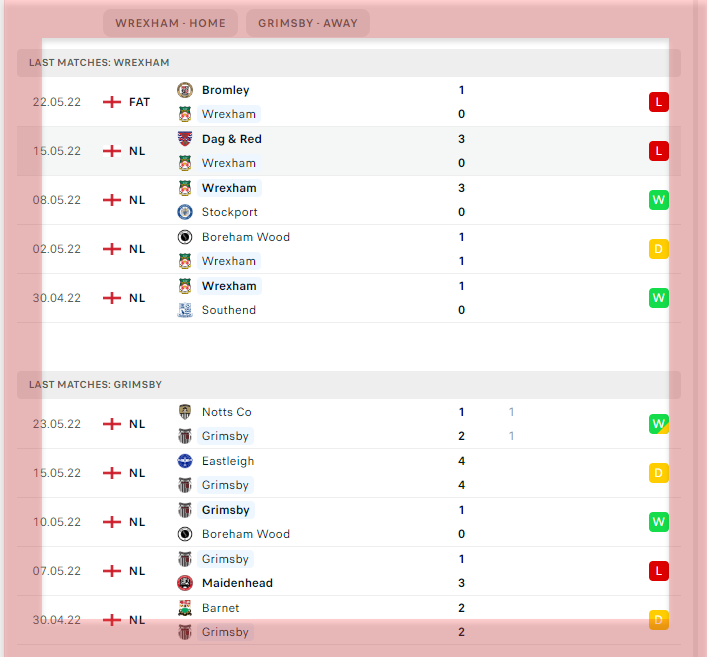