Wolfsburg vs Union Berlin – Union Berlin triumphed in their most recent match, snapping a three-game losing streak. Hoffenheim, who are in the Europa Conference League qualifications, are three points ahead of them. Wolfsburg has won and lost twice in the last five league games. They haven’t won in their last two Bundesliga games and are hoping to flip the tables today when they go to Volkswagen Arena to face the hosts.

They only met four times, with Wolfsburg winning twice, The Iron Ones winning once, and one match ending in a draw. The home team has won the last two head-to-head matches in a row while keeping a clean sheet. For the past five years, Union Berlin has been unable to defeat this opponent.

With 37 points from 24 games, the Iron Ones sit in seventh place in the standings. They won ten games in the league while drawing seven and losing seven. They totaled 32 points while allowing the same number in the league so far.

Union Berlin will enter the match on the back of a 3-1 league victory over Mainz in their previous match. They’ve been outscored in each of their last six games, allowing a total of 10 goals.

The Wolves, on the other hand, are in 12th place on the standings with only 28 points. They only won 8 games out of the 24 they played, drew four times and lost 12 times. Their overall goals to conceded ratio is 26:37, indicating that their defense is far from ideal.

Last week, Wolfsburg drew 2-2 with Borussia Mönchengladbach despite being reduced to ten men in the 70th minute. Florian Kohfeldt’s team has scored 9 goals in their last 6 games, averaging 1.5 goals per game. 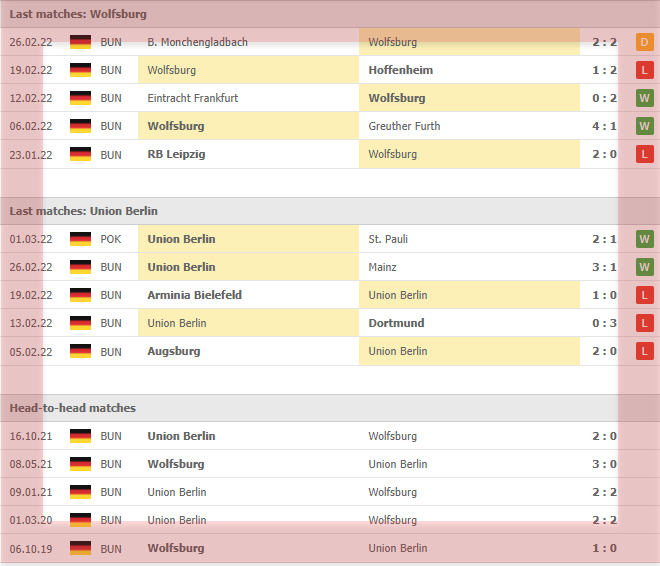