Wigan vs Accrington – preview and prediction

Wigan vs Accrington – Wigan will face Accrington Stanley, who have lost two league games in a row and are only one point behind table leaders Rotherham. Tomorrow at DW Stadium, they will face off in a one-on-one match.

With their excellent consistency, the Latics managed to finish second in the table. In terms of promotion to the Championship, they have won 24 games and drawn seven times in the league, totaling 79 points. They have a strong offensive and defensive lineup.

Wigan won 4-1 at home against Morecambe in their most recent league match, extending their unbeaten streak to five games. In five of the last six games in which the home team has participated, fewer than three goals have been scored per match.

Accrington, on the other hand, is 13th in the table with 50 points. They are well outside of both relegation and promotion danger zones. They have a seesaw of form in the league, having won 14 games and lost 17 others so far.

In their most recent league match, Accrington suffered a 1-2 setback at home. With that loss, they have now gone three games without a win in the league. Goals have been scored 21 times in their last six games, averaging 3.5 goals per match.

Wigan have won their previous three home games in League One, and have won 78 percent of their home games this season. In six of their last ten home league games, they have scored two or more goals.

Accrington has lost six of their past seven league road games. They haven’t won an away game since November of last year.

We expect a home win on Tuesday, given the visitors have only won three of their 19 away games this season. Furthermore, the hosts are coming off a five-game winning streak. 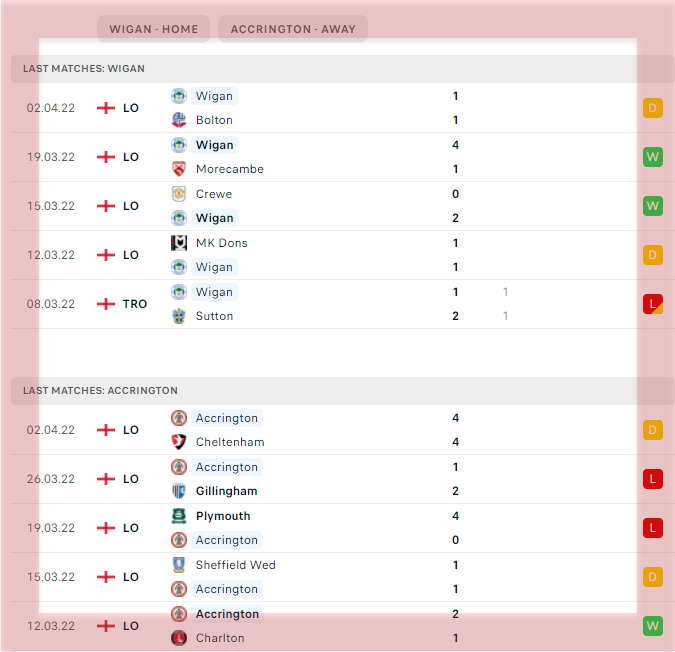