West Ham vs Silkeborg – In Group B of the UEFA Europa Conference League, West Ham has already secured a top-two finish thanks to a club record run of six straight victories in European competition (UECL). Four of those victories came during the group stages, helping David Moyes’ team to take the lead. They still need just a point to hold onto that lead and guarantee their participation in the knockout round.

Jarrod Bowen’s goal in West Ham’s 2-1 victory against Anderlecht in their most recent UECL match made him the club’s joint-top scorer in European play. Moyes will be looking to Bowen for further motivation to assist his team finish first.

The Hammers’ success in Europe has coincided with an excellent run in which they have won three of their previous five Premier League games (D1, L1), all of which have been at home. After a rocky start to the season, the most recent of those, a 2-0 victory against Bournemouth on Monday, propelled West Ham into the top half of the standings and prompted Moyes to declare “we’re fighting our way back.”

While the Hammers are aiming for first place, Silkeborg is aware that if Anderlecht loses against FCSB in Group B’s other game, a shocking victory in London will be sufficient for them to go to the UECL preliminary knock-out round. Given that they are taking part in the group stage of a European competition for the first time, the Danes themselves handed FCSB two 5-0 beatings, placing them in second position.

They lost 3-2 at West Ham in one of their two Group B losses, despite taking an early lead. However, preparations for this rematch have not gone smoothly, as Tobias Salquist was dismissed during a 3-2 league loss to Horsens at the weekend. However, they have now only won four of their 12 competitive road games this season (D2, L6), keeping just three clean sheets in the process. Manager Kent Nielsen believed his team “earned one point” from that encounter.

Gianluca Scamacca of West Ham, who has scored four goals in six games in Europe, scored an important goal in the rematch against Denmark. Sebastian Jorgensen, who has scored twice in each of his last three games and a total of eight goals this season, is Silkeborg’s leading scorer. 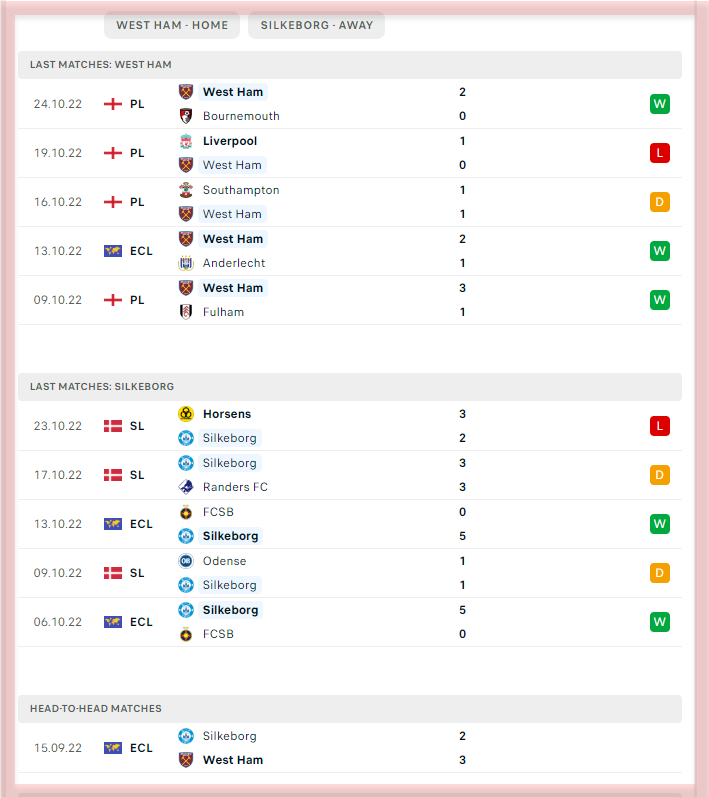