West Ham vs Sevilla -The English team, on the other hand, will face a more difficult task than expected, as they will be missing several key first-team regulars.

Jarrod Bowen, West Ham United’s best player this season, is injured and will not be available for selection here, while Vladimir Coufal, Michail Antonio, and Aaron Cresswell are also potentially out due to injuries.

With a 2-1 victory over Aston Villa on Sunday afternoon in London, the Hammers remained in contention for a top-four finish at the end of the Premier League season.

At the weekend, Andriy Yarmolenko and Pablo Fornals both scored. However, it is worth noting that David Moyes’ men have generally been in a slump of late.

West Ham had lost three consecutive games in all competitions prior to the aforementioned victory over Aston Villa. Sevilla hasn’t been doing much better of late, either.

They drew 1-1 away at Rayo Vallecano on Sunday, remaining ten points behind Real Madrid, who defeated Mallorca on Monday night.

As a result, Los Rojiblancos have drawn three of their last four La Liga games. They also lost the rematch of their Europa League last-32 round tie to Dinamo Zagreb (1-0) in the Croatian capital. Julen Lopetegui’s team has gone winless in seven consecutive away games across all competitions.

Only one of Sevilla’s last 13 road games in all competitions saw three or more goals scored. We can’t see a high-scoring game in London on Thursday because West Ham United will be missing two of their key players up front. Under 2.5 goals FT is well worth backing at 1.66 odds, while the draw is worth a shot at 3.30 odds.

While this last-16 tie could go the distance, we feel that the hosts will edge past their Spanish counterparts and win by the same scoreline as in the first leg. 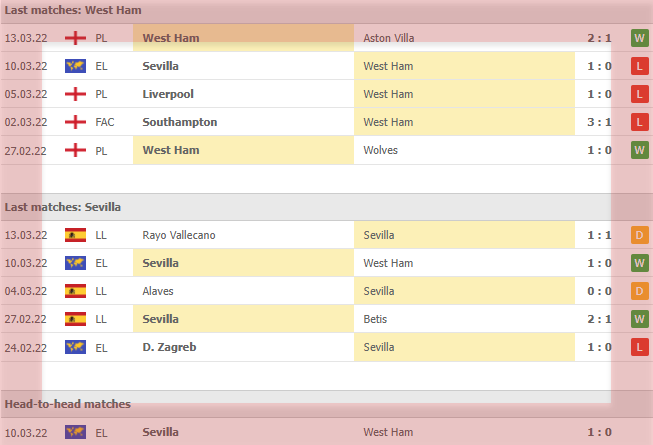