West Ham vs Manchester City – West Ham and Manchester City’s match at London Stadium on Sunday afternoon will serve as the opening act for Game Week One of the 2022–23 Premier League season.

After a shocking 1-3 loss to Liverpool in the Community Shield last Sunday, the Citizens will be looking to bounce back this weekend.

The English champions, who did play without John Stones and Aymeric Laporte due to injuries, put on an unexpectedly poor defensive display.

Erling Haaland did not have a good day last Saturday because the great Norwegian wasted several excellent opportunities in front of Liverpool’s goal.

Can the former striker for Borussia Dortmund score on his Premier League debut? Haaland scored in the most recent preseason match on American soil, a 1-0 triumph over Bayern Munich.

Despite West Ham not being the finest defensive team in the nation, we think he has a good chance of scoring here.

However, it’s also important to remember that the Hammers’ final preseason match was a goalless draw at Lens in France seven days prior.

Declan Rice, a key central midfielder who helped his team finish seventh in the Premier League last season, was kept around by David Moyes.

West Ham held Manchester City to a 2-2 draw in the first encounter between the two teams in mid-May of this year. In four of the previous five head-to-head matches, both teams made their shots. In their last 54 away games versus the Hammers, Manchester City has only prevailed in 17 of them.

Along with Liverpool, Manchester City is by far the strongest team in the league and the overwhelming favourite to defeat any opponent in the English first division. After all, the wagering odds for this game are sufficient.

West Ham, who finished eighth in the previous year, is 9.00 to defeat Manchester City at the London Stadium. Unfortunately, we lack the courage to allow such an event to take place. We’ll instead wager on Man City to win and Over 2.5 FT at 1.90 odds. 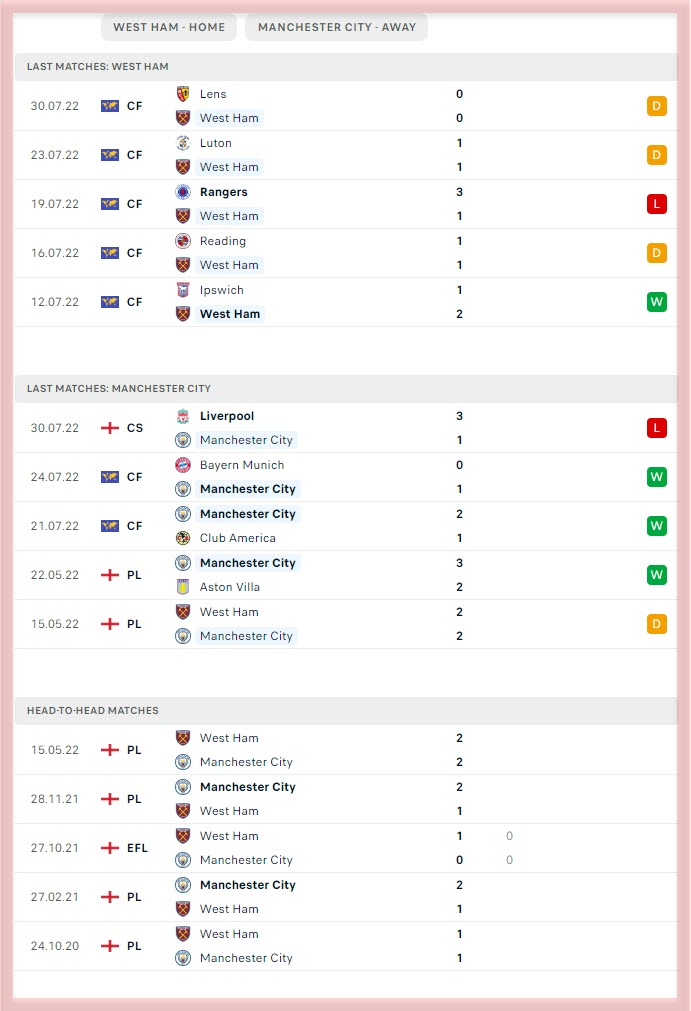