Werder Bremen vs Wolfsburg – Werder Bremen will be hoping for a better outcome after losing to Cologne 7-1 in their previous Bundesliga 1 match.

Werder Bremen had 49% of the game’s possession, but just one of its five shots on goal was successful. The goals were scored by Niklas Füllkrug (38′) and Marco Friedl (76′ own goal) for Werder Bremen.

The Werder Bremen backline is very shaky, as evidenced by their most recent results. During the span of their last six games, Werder Bremen have seen an awful 18 goals go in at the wrong end from their perspective.

Before this game, Werder Bremen hadn’t won a league game against VfL Wolfsburg in four tries.

The last time VfL Wolfsburg played Hertha Berlin, they beat them 0–5 in a Bundesliga 1 game. Wolfsburg controlled 58% of the ball during that game and made 17 attempts on goal, scoring on five of them.

Mattias Svanberg scored in the fourth minute, Maximilian Arnold in the 31st, Jonas Wind in the 34th, Ridle Baku in the 72nd, and Omar Marmoush in the 86th.

Eight shots were made by Hertha BSC, none of which were on target. The VfL Wolfsburg defense has put on a string of strong performances, leaving them with a goal-conceded total of 1 from their last 6 games.

During the same time period, they have scored 22 goals on their own. We’ll soon find out if this game will follow that pattern or not.

Looking at their previous head-to-head matches dating back to 03/03/2019, Werder Bremen has won 1 and VfL Wolfsburg has won 3, with 2 games ending in draws.

In total, 23 goals were scored in those games, averaging out to 3.83 goals per game.

On that particular day, VfL Wolfsburg had a 61% possession rate, and 2 of 11 shot attempts were successful. Lukas Nmecha (11′) and Josuha Guilavogui (84′) scored the goals.

Werder Bremen had 10 shots on goal at the other end, with 2 of them being successful. Niklas Füllkrug (21′) and Leonardo Bittencourt (23′) scored. Sascha Stegemann acted as the official.

With nothing separating VfL Wolfsburg and Werder Bremen, we have a tendency to believe that both teams will score.

Checking the betting prices for this game in the full-time result market, a win for Werder Bremen can be had for 3.13, betting on a draw is 3.64 and selecting a victory for VfL Wolfsburg gets you 2.18. These are the most competitive bets offered as of now. 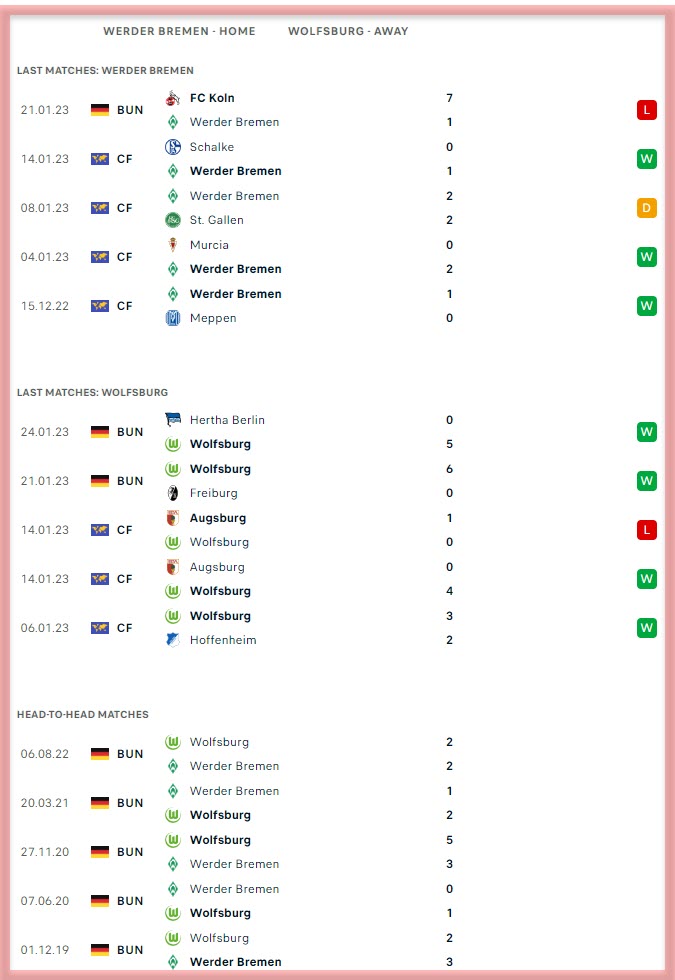