Werder Bremen vs Hertha Berlin – Following losses in their previous two Bundesliga contests, which equals the number of losses they suffered over the first nine matchdays, Werder Bremen is beginning to struggle (W4, D3, L2). The freshly promoted team’s honeymoon phase appears to be coming to an end, and the absence of captain Marco Friedl, who was dismissed in the 14th minute of last weekend’s 2-0 loss to Freiburg, could be felt in this game.

The 11th-placed Bremen are now the division’s second-worst home team (W1, D1, L3) following a 2-0 loss to Mainz in their most recent game at the Weserstadion, but a 5-1 victory over Gladbach at the beginning of October indicates this club can turn on the style when everything works. Despite Bremen’s current slump, a second Bundesliga home victory of the season appears probable here. Nine head-to-head victories in their last 13 home games against Hertha Berlin (D3, L1) show that this team enjoys playing the capital club.

Hertha will enter the match with more confidence after ending a streak of four league losses (D4, L1) with a 2-1 triumph over Schalke in the previous round. This was the team’s first Bundesliga victory this calendar year when trailing. Additionally, it was their first league victory at home this year. Club president Kay Bernstein shed a tear as he expressed relief after the game.

The visitors, who are now in 13th place, have only won one away league game this year (W1, D1, L3), although all four of their other losses came against teams who were in the top half of the Bundesliga standings. Their lone away victory came against Augsburg (2-0), a team that is sandwiched in the standings between Hertha and Bremen. This suggests Hertha can do well away from home against other mid-table teams.

Players to keep an eye on: Mitchell Weiser has won all three of his personal head-to-head matches in the Bundesliga, and he has assisted on both of Bremen’s goals in their last three games. Dodi Lukébakio has scored in three of Hertha’s previous four games and will now take on the Bundesliga team against which he averages 0.75 goals per game (W2, D1, L1). 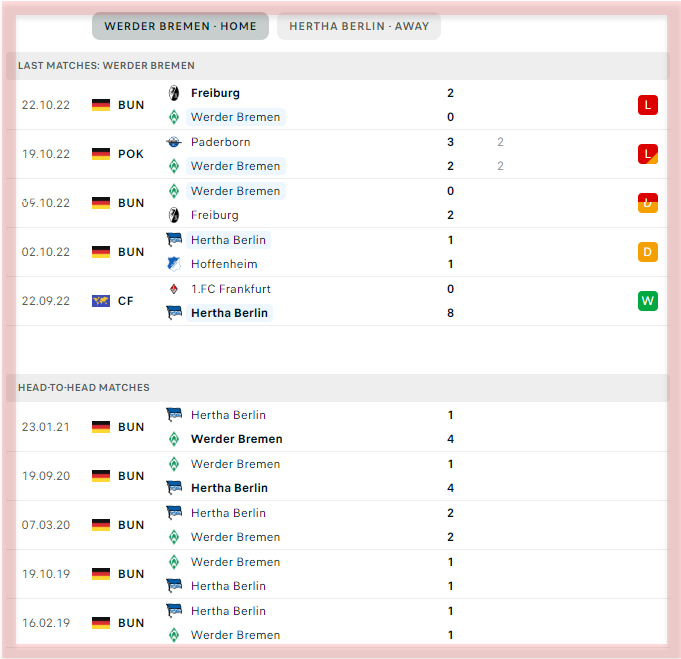