Watford vs Leicester City – Watford are one of the poorest teams in the competition, and their relegation to the Championship was only right. They’ll have to spend at least one season in the second tier, the Championship, and it’s unclear whether they’ll be able to claw their way back to the top.

They are on a long losing skid and are allowing alarmingly high numbers of goals. In fact, they are the only side in the league to have lost five consecutive league games. And a match against them is a massive opportunity for any other English Premier League team, let alone a past champion battling to regain form.

Leicester have not been their usual selves this season, and have now been eliminated from one of the European competitions for next season. They are also on a run of performances in which they have shed a lot of points, and fans have begun to wonder if the team will be able to recover. It goes without saying that the club will need a big win before the end of the season to regain the support of the fans. This is where the forthcoming match can assist them.

Expect the Foxes to win this Saturday’s match against Watford, who are suffering. Watford lost 1-0 on the road against Crystal Palace the other day, and they are now on a six-match losing streak. They have also lost six of their previous seven games and were winless in 20 of their previous 24 overall contests.

The Foxes, on the other hand, were defeated 1-2 at home by Everton last week. However, they were unbeaten in eight of their previous twelve games overall, and, more crucially, they had an excellent head-to-head record versus this opponent throughout the years. As a result, expect Leicester to win convincingly on Saturday. 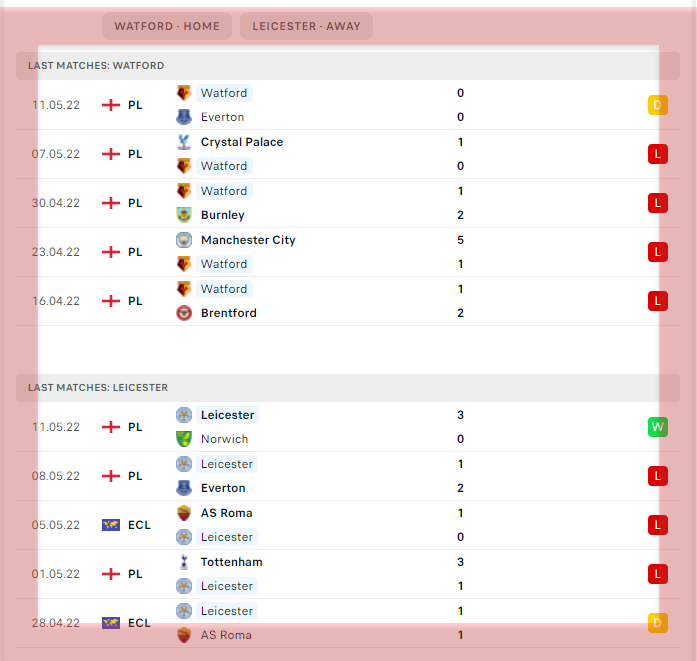