Watford vs Crystal Palace – In Wednesday’s Premier League match at Vicarage Road, two sides on opposite ends of 1-0 scorelines over the weekend will meet. Watford will welcome Crystal Palace.

Last time out, the Hornets won their first game under Roy Hodgson against Aston Villa, while the Eagles lost a tight London derby against Chelsea.

After 270 minutes of top-flight football went by without a goal for Watford under Hodgson, top scorer Emmanuel Dennis broke the Hornets’ goalless streak at Aston Villa, giving them all three points.

In the 78th minute, the Nigerian attacker’s bullet header from Ismaila Sarr’s cross ended the game in Watford’s favor, with the Hornets putting in another outstanding defensive performance under Hodgson to win up a potentially priceless three points.

Watford, on the other hand, remains firmly entrenched in the relegation dogfight, as Hodgson’s side is still in the bottom three in 18th place and four points behind of Newcastle United, thus no matter what happens this week, they will not be able to claw their way to safety.

When Chelsea came to Selhurst Park, Lady Luck seemed to be on Crystal Palace’s side, as £97.5 million man Romelu Lukaku remained relatively invisible and Hakim Ziyech’s strike for the European champions was ruled out by VAR.

However, the Moroccan attacker undid Patrick Vieira’s side’s hard work in the 89th minute, when he received Marcos Alonso’s cross and finished from a tight angle to prolong Palace’s winless run in the Premier League.

The Eagles have yet to win in the Premier League since the turn of the year, and have now gone six games without a win in the top level, a dreadful run that has them in 13th place heading into the midweek round of fixtures.

Joao Pedro and Juraj Kucka of Watford will have late fitness tests after being ruled out of the win against Villa due to knocks, and the Hornets are still missing defender Nicolas Nkoulou owing to a thigh ailment.

Dennis and Samir were both injured over the weekend, and while the former is only expected to have a minor ailment, Samir’s head injury will need to be evaluated.

If Samir is actually ruled out, Christian Kabasele and William Troost-Ekong will be ready to step in, although Hodgson would prefer to select an unchanged XI this week.

For the visitors, Vieira was forced to make a goalkeeping change against Chelsea, as Jack Butland came in at halftime to replace Vicente Guaita, who had been forced off due to a knee injury.

After being unable to face his parent club, Conor Gallagher will return to the fold, although Palace are unlikely to welcome Nathan Ferguson back before the start of April.

Joel Ward was unable to play against Chelsea due to an undisclosed illness, allowing Nathaniel Clyne to preserve his right-back spot while Eberechi Eze returns to the attack in place of Jordan Ayew. 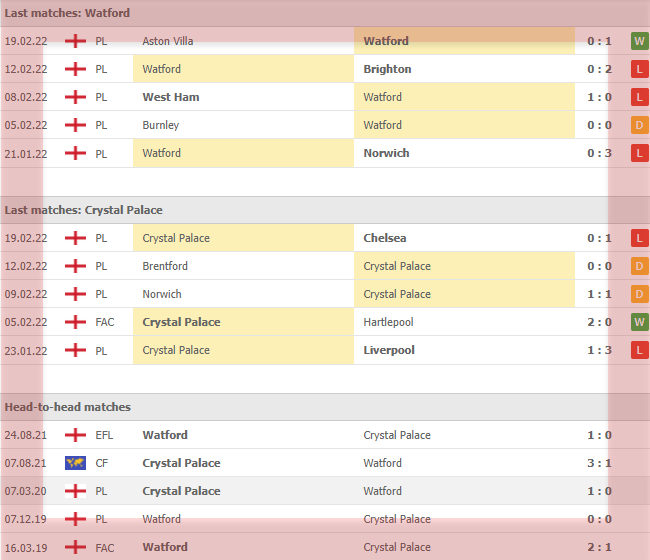