Walsall vs Swindon – Preview and Prediction

Walsall vs Swindon – Following contrasting openings to the new League Two season, Walsall and Swindon Town will face off in the first round of the EFL Cup on Tuesday night.

Prior to their journey to the West Midlands, Swindon are winless and have yet to score a goal, while the host team is in first place after two straight triumphs. Michael Flynn,

the manager of Walsall, has been given the authority to make significant roster changes now that the club is under new ownership. Currently,

after a disappointing 2021–22 season, adding up to 16 new players has helped improve the atmosphere at the West Midlands team.

On the first weekend, the team defeated Hartlepool United 4-0, and on the following Saturday, the team defeated Flynn’s old team, Newport County, 1-0. Flynn will be aware of the significance of keeping the Saddlers’ current form while not playing in fourth-tier competition because they are one of only five teams with a perfect record.

That is especially true given the arrival of fellow pacesetters Stevenage later in the week, but they will face Swindon opponents who will feel like they have a lot to show.

Even though his club was held to a scoreless draw at the County Ground against Salford City over the weekend, head coach Scott Lindsey praised his team’s performance.

The disappointment of losing 3-0 to Harrogate Town in the previous game was somewhat alleviated, but the playoff semifinalists from the previous season still need to up their game in the final third.

Considering that the Robins received eight yellow cards over the course of the weekend, including two that were given to Harry McKirdy before halftime, Lindsey could also be a little worried about his team’s discipline.

Flynn will think about making significant changes to his Walsall team, but defender injuries might prevent him from doing so, keeping 40-year-old Peter Clarke in the back.

Adam Przybek, the backup goalkeeper, should have a chance to play in net, and Timmy Abraham is expected to play in attack.

In addition, Liam Bennett and Douglas James-Taylor might play right wingback and the front two spots, respectively. Given the calibre of performance against Salford over the weekend,

Lindsey might not make many changes to his team. In midfield in the final third, Tomi Adeloye, Jonny Williams, and Ricky Aguiar might play.

Both coaches will probably take advantage of the chance to change up their starting lineups a lot, which might make their league standing meaningless. In light of this, we are betting on the visitors to win by a slim margin.

Walsall vs Swindon– Head -to- Head 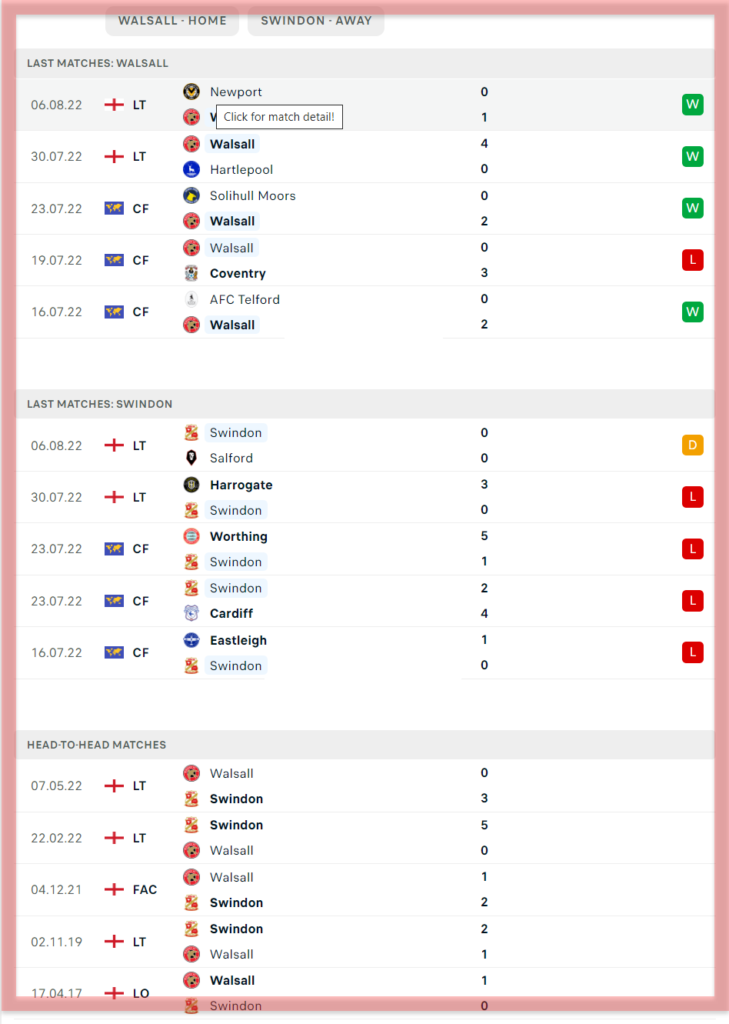