Wales vs Poland – Preview, and Prediction

Wales vs Poland – Wales will be looking for a better outcome following their 3-2 Nations League loss to the Netherlands in their previous match. Wales had 40% of the game’s possession and 4 of its 9 shots on goal were on goal.

Wales hasn’t kept a clean sheet in far too many of their recent games. The data indicates that Wales allowed 9 goals in their previous 6 games, failing to stop opponents from scoring in 5 of those contests. But this pattern won’t necessarily continue into the following game.

Poland and their travelling supporters will be looking for a better outcome in this one after losing their previous match in Nations League competition against Belgium.

Poland had 31% of the ball during that game and attempted 11 goals, scoring one of them. Four of Belgium’s 12 shots on goal were on target. The goal scorer for Belgium was Michy Batshuayi (16′).

The numbers speak for themselves; in 5 of their last 6 games, Poland has allowed goals, resulting in a total of 11 goals scored by the opposition. Poland needs to strengthen some areas of its defence.

Rob Page, the manager of Wales, will be content that he has no concerns about his team’s fitness going into this game because every player is totally healthy and available.

The Poland manager Czesaw Michniewicz does not have any fitness issues to report ahead of this game due to a totally healthy group being available for selection.

We believe that there won’t be much between Poland and Wales in this match, making scoring chances difficult. It seems to be shaping up to be a draw at this point. Therefore, we predict a close game that ends with a 0-0 result after 90 minutes.

Wales vs Poland – Head -to- Head 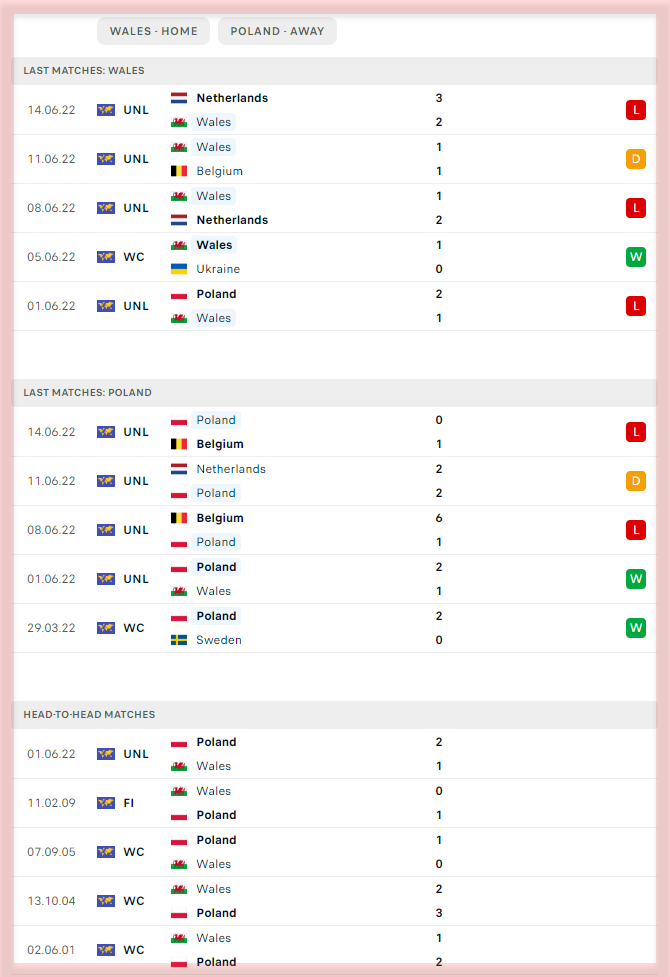