VPS vs Inter Turkue – VPS is off to a shaky start this season. They’ve played seven games thus far, with two victories, one tie, and four losses. The first two matches concluded in a win and a tie, then the club suffered a three-game losing run in the following five matchups. VPS is currently in ninth place in the league rankings, with seven points from seven games.

After their last match against SJK, VPS suffered another another defeat. By the start of the second half, SJK had scored the game’s sole goal and had held the lead for the remainder of the evening. The game ended 0-1 in overtime.

Inter Turku has had a hit-or-miss start to the season. The club has three wins, one tie, and four losses from its eight games thus far. In the previous three games, the team has also failed to win. With ten points from their matches, they are now ranked fourth in the league table.

Inter Turku’s most recent encounter was against HIFK. Both teams scored two goals in the encounter, which ended in a 2-2 FT draw.

Inter Turku won the previous h2h with a 7-1 FT score. In their last five home matches against Inter Turku, VPS has only lost once. Over 2.5 goals have been scored in three of the last five head-to-head matches.

VPS has now lost three games in a row, including the most recent meeting against SJK. Four of the team’s seven games have already ended in defeat. Inter Turku has had a mixed bag of outcomes in recent encounters, with no wins in the last three.

So far this season, VPS has played three home games and has yet to win. They have also failed to score in their last two games. Inter Turku has won one of its three away matches, while the other two have resulted in defeat. They have, however, scored in each of their road outings.

Based on previous results, we can predict that Inter Turku will win this match. Inter Turku has scored over 1.5 goals in the majority of its encounters and should do so again in this one. 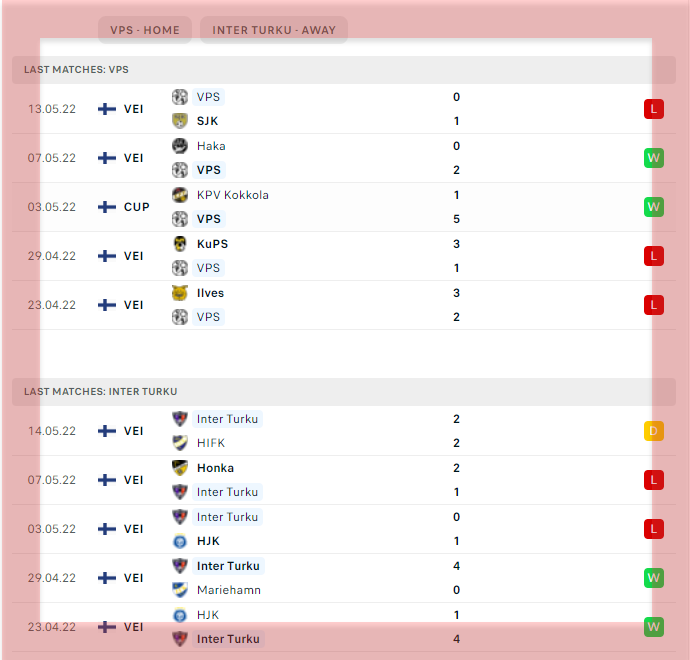 Our Prediction: Over 1.5 goals