With 51 points from 33 games, Gil Vicente is in fifth place in the standings. They won 13 times in the league, tied 12 times, and only lost 8 times. The visitors have already earned a chance to play in Europe, and there isn’t much they can do in the league to change anything.

Last Sunday, the away team beat Tondela 3-0 to end a streak of six games without a win in the Primeira Liga and beat Vitoria Guimares to the last spot in Europe. In their last six games, they have lost five of them and given up 11 goals.

On the other hand, Vitoria Guimaraes is 6th on the table with 45 points and is just below her. Out of the 33 games they played, they won 12 of them, tied 9 of them, and lost 12 of them. They have nothing left to prove, so they will try to end the season on a good note.

After a 1-1 draw at Boavista last Friday, Vitoria Guimaraes have not lost in their last 4 league games. They have had one of the best records on the road this season, but they have only won one of their last five games away from home.

Gil Vicente has won the last two head-to-head games, scoring a total of seven goals. In the last six league games, Vitoria Guimaraes has only won once. In their last seven head-to-head matches, both teams scored and there were more than 2.5 goals. In the other game, Vicente won by a score of 3-2. 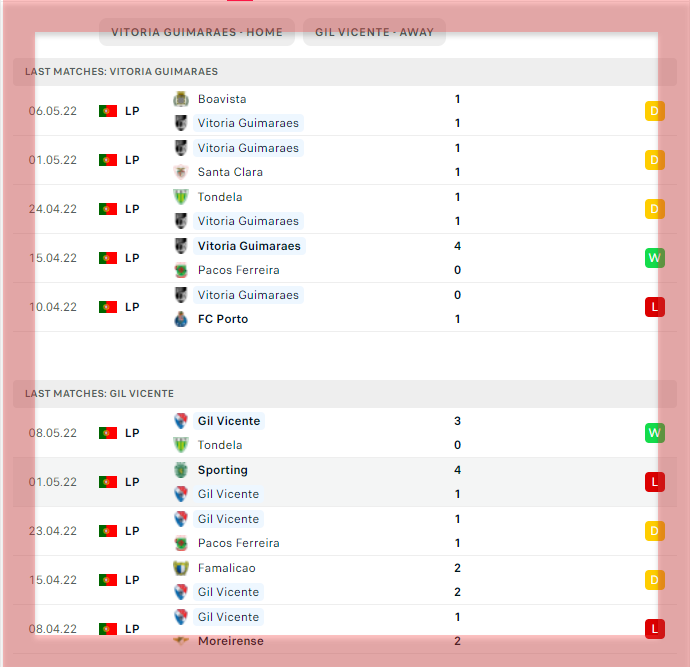