Vitesse vs Ajax – Preview and Prediction

Vitesse vs Ajax – Ajax needs to win just one more game to win the Eredivisie. On Sunday, they will go to GelreDome to play the last game of the season against Vitesse.

With 82 points from 33 games, Ajax is in first place in the Eredivisie. In the league, they won 26 games, tied 4 games, and only lost 3 games. They are already Champions, and they have also earned a spot in the UCL for next season. This season, the visiting team has scored the most goals, a total of 96.

Ajax is coming into the game after beating Heerenveen 5-0 in their last Eredivisie match. In their last six games, they have scored 14 goals and have done so every time.

Vitesse, on the other hand, has 50 points and is in sixth place on the table. In the league, they won 15 of the 33 games they played, tied 5 of them, and lost 13 of the games. They are already in the Conference League Playoffs, so they have nothing left to fight for at this point.

After their 1-2 league win against Fortuna Sittard, Vitesse will be hoping for more of the same. The home team hasn’t been doing so well lately in front of the goal, failing to score in two of the last five games.

Ajax has never lost to this opponent in their last nine head-to-head games, in which they won eight of them. So far this season, they have played 16 games away from home and have only lost once.
It’s likely that the visitors will score today, since they’ve scored in 19 of their last 20 games and 13 of their last 5 games.

Vitesse, on the other hand, hasn’t beaten Ajax in the league in the last six games. They have also lost their last two league games at home.
From what I can tell, the top team, Ajax, will win on Sunday.

Vitesse vs Ajax – Head To Head 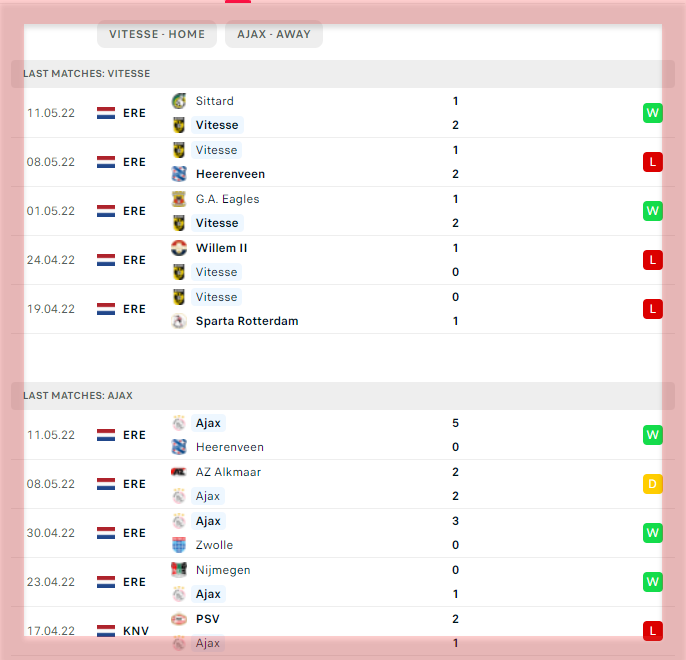 Our Predictions : Over 2.5 goals