Villarreal vs Real Sociedad – This match has the potential to be one of the best in the Spanish top flight this season. Both are still in contention for a place in the Europa League, and are currently ranked 6th and 7th in the table, separated by only three points.

Given that there are only two games left in the season, you can imagine how intense the pressure will be on either of them this Sunday.  Sociedad is in sixth place in the table, and a draw would suffice, as they already have a three-point cushion over their opponents. However, the team must be wary of their recent road performances, which have seen them concede frequently.

Villarreal, on the other hand, is full of confidence after a memorable Champions League campaign in which they defeated giants such as Juventus and Bayern Munich.

Furthermore, they are playing at home, and their supporters will be rooting for them to qualify for the Europa League’s next season. After all, they are a side that has just advanced to the Champions League semi-finals. Furthermore, whenever these two teams have faced off in the past, goals have been plentiful.

The last match day, Villarreal defeated Rayo Vallecano 1-5 on the road. They were also unbeaten in seven of their previous ten games overall, with their only three losses coming against Liverpool, Manchester United, and Barcelona since mid-October.

Real Sociedad, on the other hand, defeated Cadiz 3-0 at home last week. They had also gone undefeated in 7 of their previous 9 overall games and 9 of their previous 12 road outings. Taking these insights into account, as well as prior h2h scorecards, expect a goal-fest between the two this Sunday. 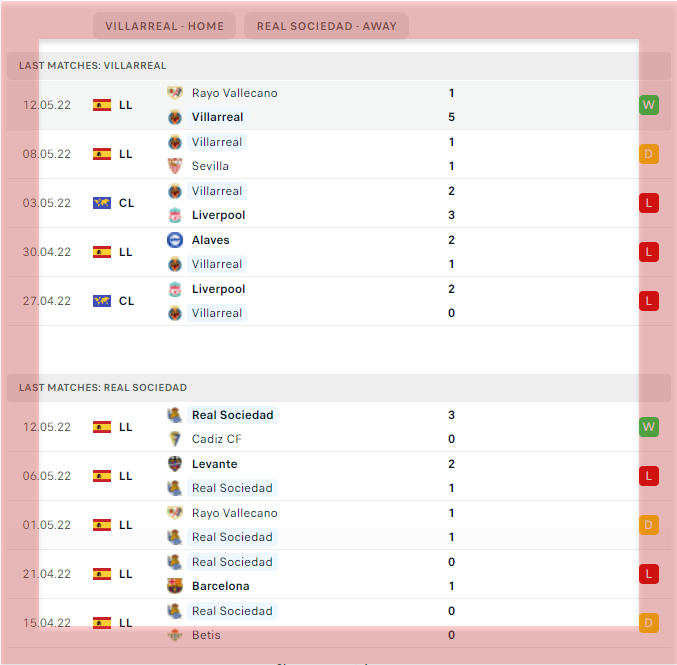