Viborg vs Vejle – Preview, and Prediction

Viborg vs Vejle – Since the start of the relegation playoffs, Viborg has struggled with their form. The club has one victory, three draws, and one loss in its last five games.

With their present position, the squad has also secured a spot in the Superliga for the following season. The team is currently in first place in the relegation playoffs.

Viborg’s most recent encounter was against Nordsjaelland, in which both teams scored one goal apiece and the match ended in a 1-1 FT draw.

Vejle has struggled in all of their games this season, putting them in danger of relegation. The team is now in the relegation zone of the playoffs, with their current standing.

So far, the club has only collected 22 points from their matches. The club has one victory, one tie, and three losses in its last five games. They’ve also lost three of their last four games in a row.

Vejle’s last match was against Midtjylland. Despite the fact that Vejle scored the game’s first goal, Midtjylland rallied back to score three goals. Vejle was defeated 3-1 in overtime in this match.

The most recent h2h finished in a 2-2 FT draw, and in the last five head-to-head meetings, Vejle has failed to win. The team’s performance had pushed Viborg and Vejle into the relegation playoffs.

Both teams have experienced issues with their performance. Viborg has gone winless in their last three games, while Vejle has lost three games in a row.

Viborg has had a strong home record, with no losses in the last five games. The club has won three and drawn two of their past five games.

Vejle, on the other hand, appears to be having some issues with their away form. They have only won one of their last ten away games.

Based on their records, Viborg is the superior team. According to the odds, the game will most likely end with both teams scoring, resulting in a total of over 2.5 goals. 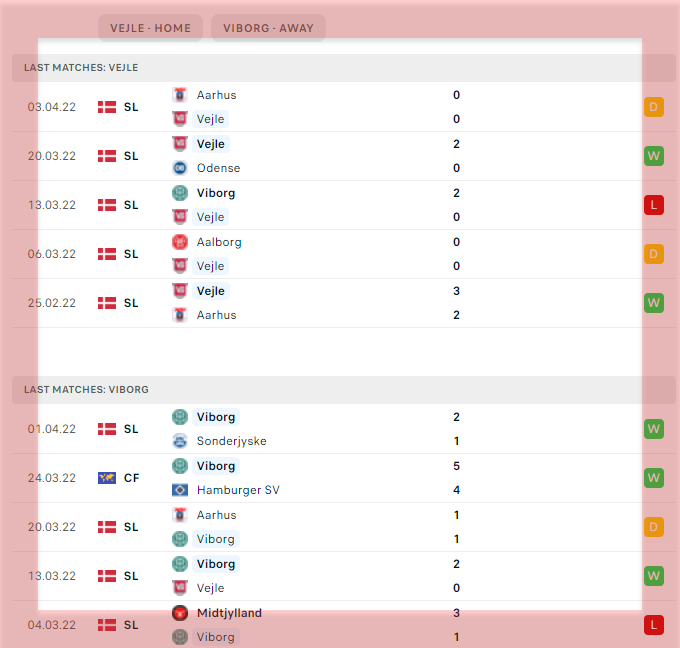