Viborg vs Aarhus – Preview and Prediction

Viborg vs Aarhus – Viborg had won two of their first three games in their relegation round. But as the matches went on, they got worse and worse. Viborg has won two of its last seven games, tied four times, and lost once. At the moment, they have 37 points from their games and are the first team in danger of going down. Odense is right behind them, so Viborg needs to win the rest of their games if they want to make it into the Conference League playoffs.

Viborg’s last game was against Vejle. Both teams scored two goals, so the game ended in a tie with a final score of 2-2.

Aarhus hasn’t won a single game in the relegation round because they haven’t done well in their games. In the seven games they’ve played so far, the team has won three and lost four. The team has six more points than the first team on the bottom of the table. So, the team will probably still be in the Superliga next year.

The last game Aarhus played was against SonderjyskE. Both teams scored one goal, so the game ended in a tie with a final score of 1-1. The last head-to-head match was won by Viborg with a score of 0-2 FT. The last two head-to-head games in a row had under 2.5 goals. In the last five head-to-head games, Aarhus has not won.

In their most recent games, both Viborg and Aarhus had trouble getting wins. In the last seven games, Viborg has won two of them, while Aarhus has not won a single one.

The last five times Viborg has played at home, they have not lost. Since the start of the relegation group, they have only won one of their home games. But the last three games in a row have all ended in a tie. Aarhus, on the other hand, has lost its last two away games in a row and scored less than 1.5 goals in each of those games.

From what I can see, the game will probably end in a tie or a victory for Viborg. In this match, we can expect both teams to add to the scoreboard. Viborg has scored four goals in their last five home games, so it is likely that they will score again in this match.

Viborg vs Aarhus – Head To Head 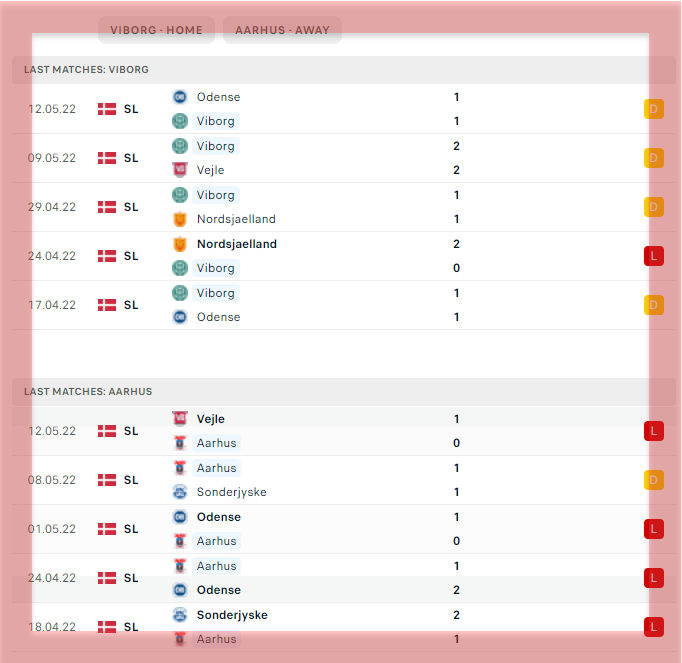