VfB Stuttgart vs RB Leipzig – Stuttgart will hope to carry their pre-season form into the new Bundesliga season when they visit DFB Pokal champions RB Leipzig on Sunday afternoon at Mercedes-Benz-Arena.

In terms of the DFB Pokal, Stuttgart had to play the first round of the 2022/23 season last Friday, and they won 0-1 away against Dynamo Dresden. Die Schwaben had a great overall performance despite having their center-back Waldemar Anton sent off midway through the second half.

Nonetheless, with the recent acquisition of Konstantinos Mavropanos to the starting lineup, the defence looked strong. At the other end, striker Darko Churlinov made the difference between the two teams by scoring the game’s only goal early on.

It was Pellegrino Matarazzo’s fifth consecutive victory this summer, following victories over Boblingen (a lower-division team), Zurich (a Swiss Super League side), Brentford, and Valencia.

It will be fascinating to watch whether such a superb run of form will help Stuttgart escape defeat against RB Leipzig, who will head to Mercedes-Benz-Arena as favourites despite their previous failings.

RB Leipzig had conceded five goals in each of their previous two games, although they had already played Liverpool (in a friendly) and Bayern Munich (in the German Super Cup).

Stuttgart had a fantastic pre-season, but RB Leipzig is still at least a level higher. After all, the visitors have won seven and drawn one of their last eight games with Stuttgart.

However, based on all we’ve seen from the two sides during their summer preparations, we predict a goal fest here. Also, the mismatch of Pellegrino Matarazzo on one side and Domenico Tedesco on the other side shouts goals. 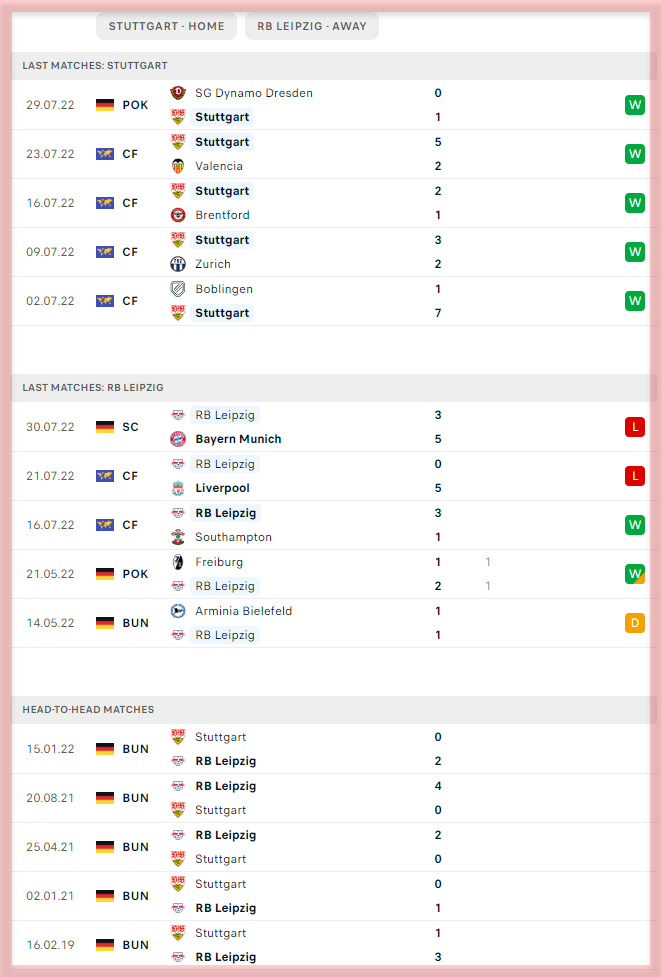