Venezia vs Cagliari – Preview, and Prediction

Venezia vs Cagliari – Cagliari will meet Venezia in the final round of the 2021/22 Serie A season at Stadio Pierluigi Penzo.

I Rossoblu find themselves in a difficult situation heading into the last day of fixtures, two points behind Salernitana in the safe zone.
Salernitana has a home match against Udinese scheduled for Sunday night, and if they win, Cagliari will play in Serie B next season.

While Cagliari has a chance of staying up, Venezia will almost certainly be in the second level next season.

Interim manager Andrea Soncin’s team is currently at the bottom of the league table, five points behind Salernitana in the relegation zone.
However, we must add that Venezia will be in better spirits than Cagliari going into this encounter, and we wouldn’t be surprised if the hosts came out on top.

The previous two league games had yielded four points for Venezia. They scored four goals in a 4-3 home win over Bologna and then held Roma to a 1-1 draw at Stadio Olimpico last weekend despite playing with ten men for more than 55 minutes.

The tie was the most common result in this matchup’s history, occurring in 6 of the previous 13 H2H meetings. In each of the previous three head-to-head meetings, both teams were on point.

In the last six home encounters against Cagliari, Venezia has won three, drawn two, and lost only one, scoring 12 goals in the process.

Cagliari are in desperate need of points, having picked up just one point in their last four Serie A games. They have a bad record versus Venezia at Stadio Pierluigi Penzo as well.

We believe there is good value in backing Venezia to win at 4.75 odds, as well as the hosts to score two or more goals on Sunday night at 3.25 odds.

Venezia vs Cagliari- Head To Head 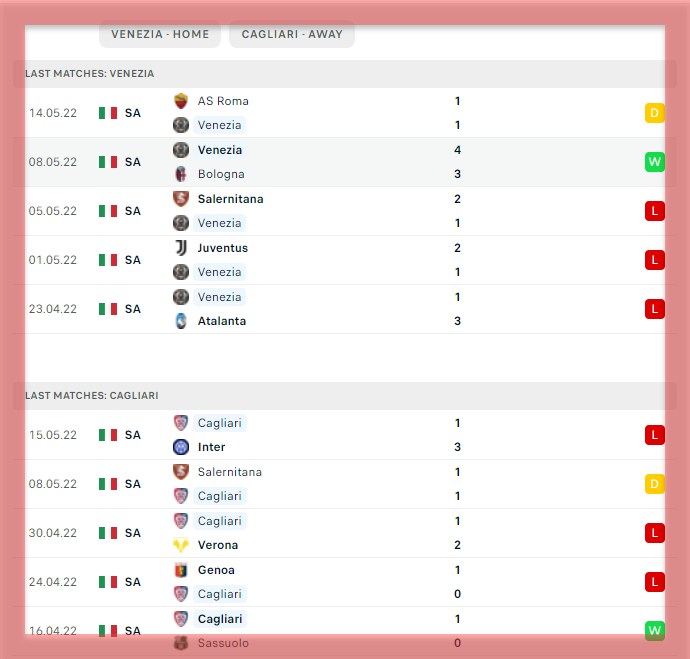