Varbergs vs Varnamo – Preview, and Prediction

Varbergs vs Varnamo – Varbergs will host Varnamo in round 12 of the Sweden Allsvenskan on Saturday. Both teams are close above the relegation zone. The Varberg Energi Arena will witness the confrontation between these two teams.

Varnamo has 12 points from 11 games, which puts him in 12th place overall. They lost five times while also having three wins and three draws. They had gained 7 points from their previous 5 games, both at home and away, coming into this one. That equals an average of 1.4 points per game.

Varnamo will be hoping for a better outcome after suffering a 0-1 loss against Kalmar in their most recent Allsvenskan match. In 5 of their most recent 6 games, they have allowed goals, resulting in a total of 7 goals scored by opposition.

Varberg, on the other hand, is located immediately below in the 13th spot on the standings with 11 points. In the league, they won three times, drew twice, and lost six times out of the 11 games they played.

They haven’t scored in two of their last five games, which shows how poorly their recent goal-scoring efforts have gone. The visitors will be hoping for a better outcome here after their 4-1 Allsvenskan defeat to Elfsborg in their previous match.

Varbergs games have recently tended to be entertaining affairs with lots of scoring. Both sides have scored a combined total of 20 goals in in their last six games.

Varberg have been toppled just once at home this season, while the visitors have won only once the road. Both clubs have had rocky starts to the new season in Sweden, and because defensive problems are a common occurrence in both locker rooms, we anticipate both teams to give up.

After suffering a 4-1 Allsvenskan defeat to IF Elfsborg in their most recent game, Varbergs BoIS will be looking to get back on the winning track tonight.

IFK Värnamo and their supporters are hoping for a better outcome this time after losing to Kalmar FF in their previous Allsvenskan matchup.

The previous two league games between Varnamo and Varberg were played away from their home field. Therefore, we believe that a home victory today is possible. 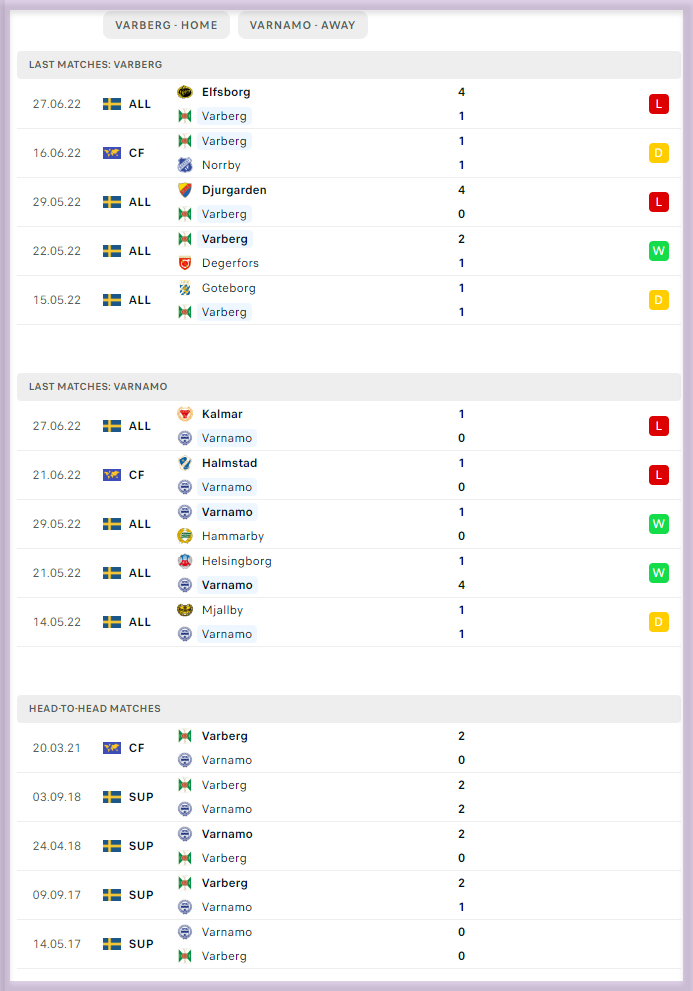