Varberg vs Degerfors – Preview, and Prediction

Varberg vs Degerfors – Varberg‘s recent form suggests that they are having some difficulties. The club enjoyed a strong start to the season, winning two of its first three games.

However, their form deteriorated, as they went winless in their last five games. In the previous five games, the team has failed to score more than 1.5 goals.

The team is currently ranked 12th in the league, with eight points from eight games. Varberg’s most recent encounter was against Goteborg.

Both clubs scored one goal apiece, and the game ended in a 1-1 FT draw. Degerfors’ season got off to a difficult start. Degerfors have lost their first six matches in a row.

However, the squad has won its last two games in a row, which has helped the team climb the rankings. They’ve also scored more than 1.5 goals in each match.

With six points, the squad is currently in third place from the bottom of the standings. Degerfors’ most recent encounter was against Helsingborg.

Degerfors scored two goals in the match, while Helsingborg only managed one, resulting in a 2-1 FT victory for Degerfors.

The previous h2h concluded in a 0-0 draw. Degerfors has won both of their home meetings against Varberg this season.

Degerfors and Varberg have each won three of their last eight head-to-head matchups. Degerfors have improved their play in recent games. After losing their first six games in a row, the club is now on a winning streak.

Varberg, on the other side, has gone five games without a win. With their current form, the team will find it difficult to win the game.

Varberg has played four home matches thus far, winning one, drawing one, and losing two. Only one of the team’s four home games has resulted in a goal.

Degerfors has traveled on four occasions. The team lost the first three away matches before winning the most recent one.

Varberg has drawn two of their previous five games, while Degerfors has won both of theirs. As a result, I anticipate Degerfors will win or tie the match. Both sides have scored in the majority of their recent matches and should do so again in this one.

Varberg vs Degerfors – Head To Head 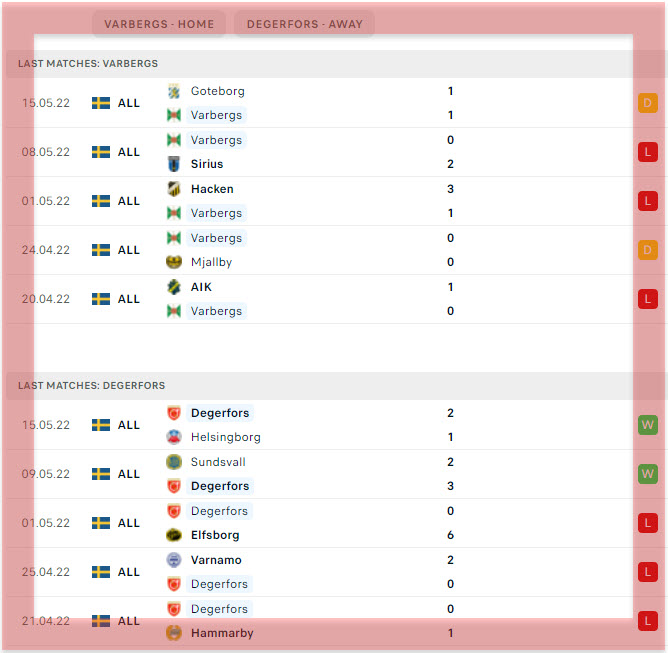