Despite this, they are still at the bottom of the Western Conference rankings after two victories, two ties, and six losses in the first ten rounds. The Caps didn’t have their best weekend, either, as they needed a late equalizer in the opening minute of stoppage time to salvage a point against fellow relegation candidates, the San Jose Earthquakes.

The fact that the Whitecaps gave up three goals in the second half of their home encounter against the San Jose Earthquakes speaks volumes about their current state. To make matters worse, FC Dallas, one of the strongest teams in the conference, will visit BC Place Stadium on Wednesday evening.

With only eight goals conceded in ten games this season, FC Dallas has the best defensive record in the league. The visitors will be in great spirits after cruising through the LA Galaxy in the Western Conference derby at Dignity Health Sports Park in Carson over the weekend.

Before their 27th match with the Vancouver Whitecaps, Dallas leads the head-to-head tie by three victories. Despite this, Vancouver had won three and drew two of their previous five encounters with Dallas.

In six of the last seven head-to-head meetings between the two teams, the Over 2.5 goals FT & Both Teams To Score wager paid off. Vancouver Whitecaps vs. FC Dallas Prediction

Dallas is on a roll, having won six and drawn three of their last nine MLS games. They looked terrific against LA Galaxy on Saturday night at 2.45 odds, and we see value in backing them to beat Vancouver Whitecaps at 2.45 odds.

We also like the 2.62 odds on Jesus Ferreira scoring for the visitors at any time. With nine goals so far this season, Ferreira leads the league in scoring. In Saturday’s 1-3 triumph over the LA Galaxy, the American forward scored twice. 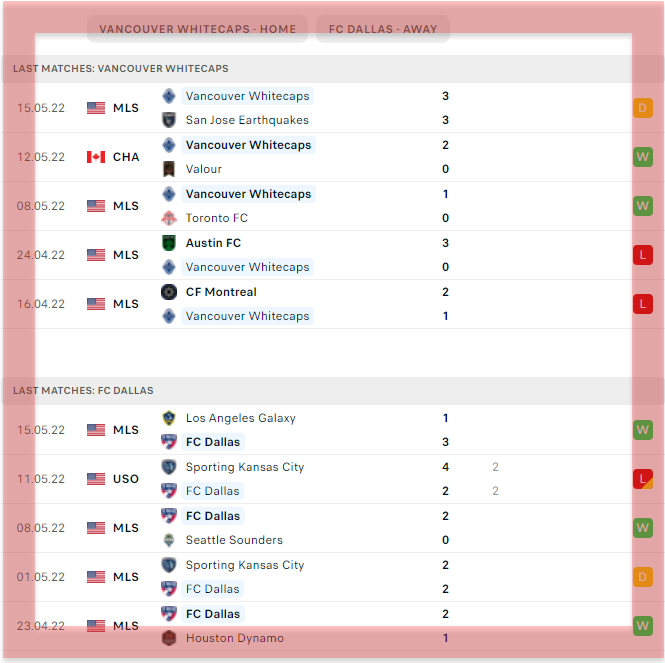