Valur vs Leiknir – Preview, and Prediction

Valur vs Leiknir – As Valur hosts Leiknir in the battle to avoid relegation, the 10th game of Besta deild karlais will take place on Tuesday. At Hldarendi, these two squads will go head-to-head.

With 16 points after nine games, Valur sits in fifth place in the standings. They were victorious five times, drew once, and fell short three times in the league. After a four-game losing streak in several competitions, the hosts are still second from bottom in the Championship Group.

After four straight losses, three of which came in league play, the hosts eventually broke their losing streak when they defeated league leaders Breidablik 3-2 in their previous match. Valur have scored three or more goals in five of their past six games. They’ve racked up a total of 12.

Leiknir, on the other hand, is in last place on the leaderboard with just four points. They haven’t won a game yet, drawing four times and losing five times in the nine matches they’ve played.

In addition to their defensive shortcomings, they’ve also struggled offensively, allowing 15 goals while scoring just six. Leiknir and Hafnarfjordur tied 2-2 in their most recent league meeting.

So far this season, they haven’t won a game, despite playing nine matches. The guests have been outscored by 10 goals in their last six games, with five of those defeats coming on the road.

Valur has won four of their previous five h2h games, while Leiknir has only triumphed once. Only one side has scored in each of their last four encounters.

It was a 1-0 victory for Leiknir in their last league meeting. There have been four wins and one defeat for Valur in their five games on home soil thus far in this season’s league. Their home results accounted for well over seventy-five percent of their total point total.

While everything is going on, the Besta deild karla hasn’t seen any success for Leiknir since the end of August. Since then, they’ve gone 10 games without a victory in a row at various sites.

Valur vs Leiknir – Head -to -Head 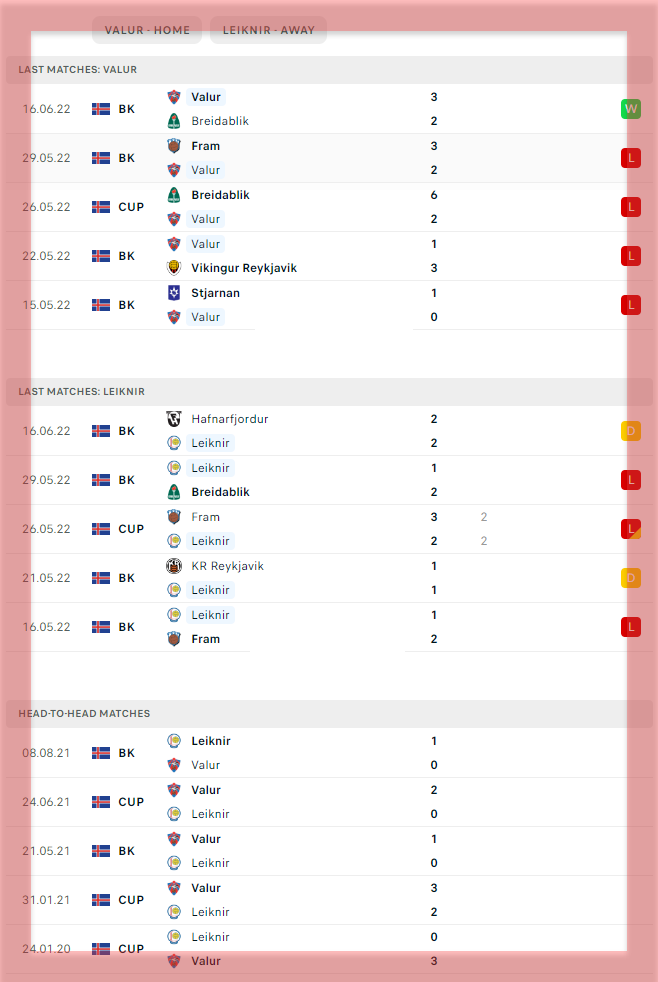