Valerenga vs HamKam – Preview, and Prediction

Valerenga vs HamKam –  Valerenga is off to a good start this season. They have won three and lost three of their six league games this season. They may be concerned by the frequent recording of a negative display in the beginning. As a result, they’ll be hoping to acquire some traction.

Valerenga’s most recent league match was a 1-0 loss on the road against Tromso. Before suffering the aforementioned defeat, they had won two consecutive league games. As a result, they will be aiming to resume their winning ways.

Ham-Kam, on the other hand, has had a shaky start to the season. So far, they’ve won one, drawn three, and lost one of their five league games. The dismal start to the season moved them to 11th place in the standings. They’ll be looking to improve their standing by scoring points.

In their most recent league match, Ham-Kam were held to a goalless draw at home against Aalesund. It was their fourth game in a row without a win in the league. They’ll be looking for a better performance in their upcoming league games.

Valerenga are undefeated in their last five meetings with Ham-Kam, and six of the ten head-to-head matches between these two teams saw both teams score. At this site, Ham-Kam has yet to win over Valerenga.

This season, Valerenga has won both of its home games. Such a strong start will only encourage them to seal more deals. In addition, they have never lost against Ham-Kam in a head-to-head matchup at this arena.

Valerenga’s safe zone form is more than enough to support them. Ham-Kam, on the other hand, has drawn one and lost one of their two league road games this season.

Their winless start hasn’t been very impressive. When the referee blows the final whistle, we are betting on Valerenga to win this match. 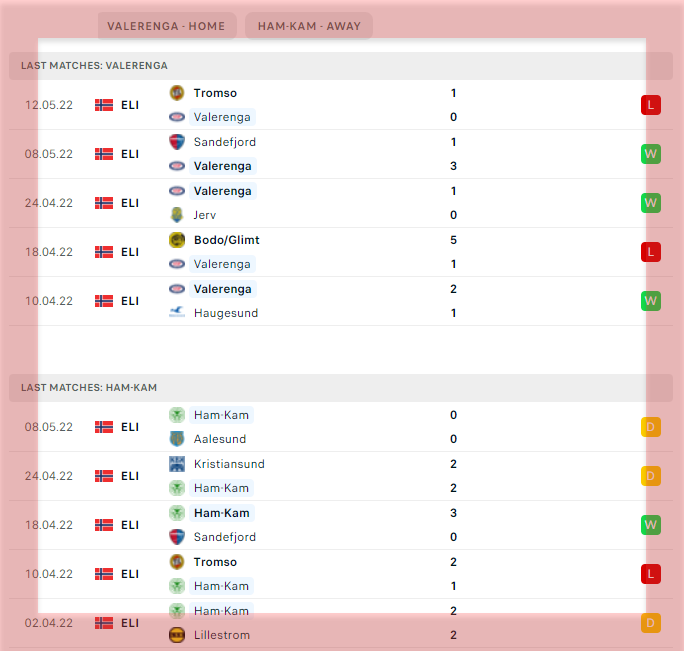