Valencia vs Levante – Preview and Prediction

Valencia vs Levante –  Levante has been a relegation contender since the beginning of the season, and they have now been relegated as expected. They now need to go on a rampage and put points on the board with only a few games left.  However, their desperation will just exacerbate their poor performance. They’ve only won five of their 33 games so far, and they’ll need to win six of their remaining five to get into the playoffs.

Valencia, who are now in the middle of the table, will want to take advantage of this situation. Even if they have no realistic prospect of qualifying for Europe next season, they can still strive to end the season on a high note. They used to be among the finest in the Spanish first division, and their fans are suffering greatly as a result of their decline. Expect them to take advantage of this matchup and win convincingly.

Valencia was defeated 2-0 by Villarreal on the road last matchday. It’s also worth noting that they’re currently suffering with their form. And this is where the next encounter will be beneficial to them.  Levante was beaten 2-3 at home by Sevilla last week, and they had lost five of their previous seven games. Also worth noting is the fact that they have only won two league games on the road in the last 12 months. They also have an unfavourable head-to-head record against this opponent ,In light of these insights, Valencia should be able to pull off a thrilling victory over a desperate Levante. 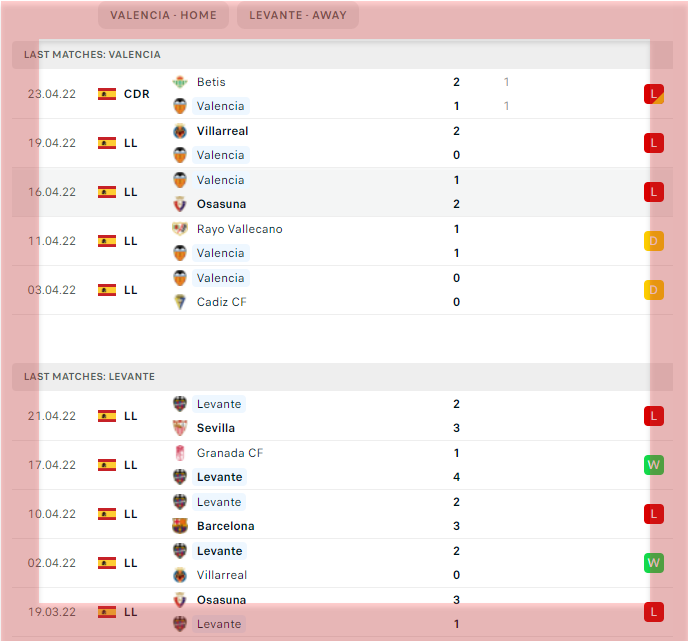