Valencia vs Granada – preview and prediction – team news, and lineups

Valencia vs Granada – Granada is having a bad year, as they are yet to win a league game in 2022, after playing eight league games. Their five-game losing record came to an end last week with a draw, ensuring another stalemate.

Valencia finally got a win this year in the previous match after 7 games of denying all three points. The Nazares will head to Estadio de Mestalla this weekend in search of their first win of the season, with only 8 points and 7 positions separating them.

With 25 points from 26 games, Granada is in 17th place in the standings. They won five times in the league, drew ten times, and lost eleven times. They scored 27 goals while allowing 40, indicating that their defense has to improve.

The visitors had a goalless draw with Cadiz in their previous LaLiga match. Granada’s attacking players have struggled to score goals in their last six games, scoring only three times.

Los Murciélagos, on the other hand, are in 9th place on the standings with 33 points. They won 8 games, drew 9 games, and lost 9 games out of a total of 26 games played. So far in the league, their total goals to conceded ratio is 38:42.

Valencia defeated Mallorca 1-0 in their previous match after suffering back-to-back league defeats. José Bordalás’ team has scored six goals in their last six games, at an average of one goal per match.

Valencia, on the other hand, is expected to win, given the visitors have lost their past three away games in a row and haven’t won an away match in over three months. 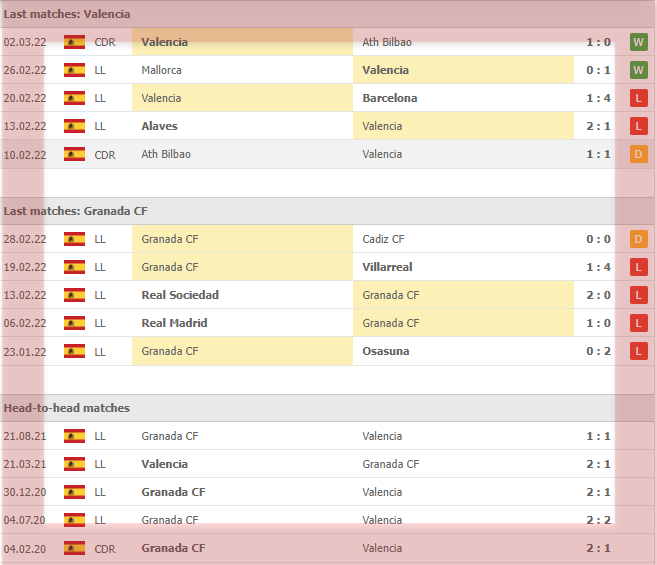 Our Prediction: Home to win