Valencia vs Barcelona – preview and prediction – team news, and lineups

Valencia vs Barcelona – Barcelona will be looking to get back on track when they travel to Mestalla on Sunday afternoon to face Valencia in Spain’s top division.

Valencia is now in 12th place in La Liga, eight points below the top six. The Catalan giants are currently fourth in La Liga, four points behind third-placed Real Betis.

Valencia appeared capable of competing for a European spot this season in the later stages of 2021, but their performances and, more importantly, results in 2022 have been underwhelming.

Los Che are in the Copa del Rey semi-finals after a 1-1 draw with Athletic Bilbao in the first leg of their last-four match on February 10, but they haven’t won a league match since December 20.

Jose Bordalas’ side has won just two of their past six games, and they are coming off a 2-1 loss to struggling Alaves on February 13.

Barcelona, on the other hand, needed a 96th-minute equalizer from Luuk de Jong to earn a point against Espanyol last weekend, but they are still in fourth place in La Liga with 39 points from 23 games.

With a game in hand, the Catalan giants are only four points behind third-placed Real Betis, and have also played one fewer match than fifth-placed Atletico Madrid, with neither team able to mount a title challenge this season; indeed, Xavi’s side is 15 points behind leaders Real Madrid heading into the next round of games

Barcelona drew 1-1 with Napoli in the first leg of their Europa League elimination stage playoff on Thursday evening, with Ferran Torres scoring from the penalty spot in the 59th minute.

Valencia will be without Jasper Cillessen and Gabriel Paulista due to injury, but the hosts have no additional fresh concerns going into the match against Barcelona.

With Bryan Gil, Hugo Duro, and Dimitri Foulquier all vying to return to the first XI, head coach Bordalas is anticipated to make changes from the team that started against Alaves last time out.

Former Barcelona youngster Ilaix Moriba is expected to start in midfield, while Carlos Soler and Goncalo Guedes are certain starting for the home side at Mestalla.

Barcelona will be without Dani Alves and Gerard Pique due to suspension, while Ronald Araujo, Clement Lenglet, and Samuel Umtiti are all injured, putting the visitors’ defense in jeopardy.

Sergino Dest is expected to start at right-back, while Oscar Mingueza could be called upon to play with Eric Garcia in the middle of the back four.

Memphis Depay, Sergi Roberto, and Ansu Fati are all out due to injury, but Sergio Busquets, who was on the bench against Napoli, will return, and Gavi might also play in the front three. 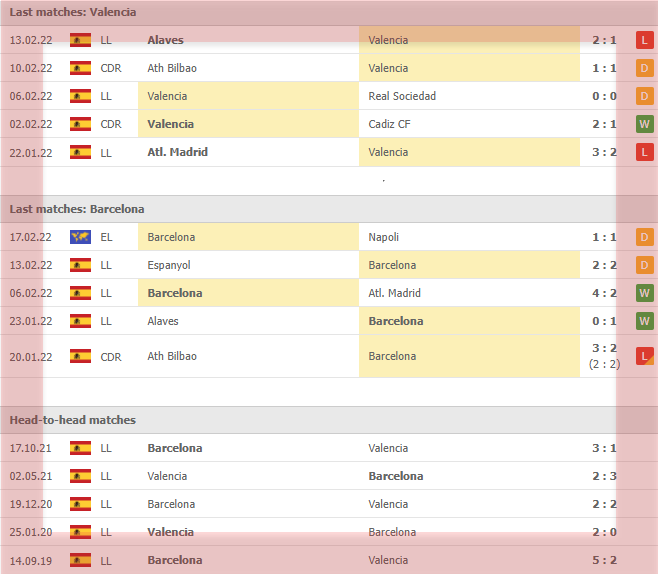