Valencia vs Ath Bilbao – Valencia is getting ready for this encounter after a 2-2 tie with UD Almera in La Liga.

Valencia enjoyed a 57% possession advantage in that contest and two of its 16 efforts on goal were successful. José Gayà (65′) and Justin Kluivert (48′) scored goals for Valencia.

Almera made 14 attempts at goal, two of which were successful. For UD Almera, goals were scored by Portillo (54′) and Chumi Brandáriz (74′).

Valencia under Gennaro Gattuso have scored 11 goals in their previous six games. The total number of goals scored against them over that time is six.

Athletic Bilbao and its visiting supporters will be hoping for a better outcome after losing their most recent La Liga match against Real Madrid.

Athletic Bilbao enjoyed 50% of the possession in that contest and none of their 18 shots on goal were successful. Real Madrid had 10 shots, two of which were on goal. Real Madrid scored goals through Toni Kroos (90′) and Karim Benzema (24′).

Over the course of their most recent six games, Athletic Bilbao under Ernesto Valverde have scored eight goals. There have been six goals scored against them overall in those games.

When comparing their previous head-to-head matches, which date back to 07/02/2021, Valencia won one of them and Athletic Bilbao won one and tied four others after 90 minutes of play.

During those matches, they combined for 8 goals, scoring 4 for Los Che and 4 for Los Leones. That equals 1.33 goals per game on average.

The two last competed in a league game on August 21, 2022, in La Liga Match Day 2, with Athletic Bilbao defeating Valencia 1-0.

Athletic Bilbao enjoyed 37% of the game’s possession and only one of its 11 shots on goal were successful. Lex Berenguer (43), their lone scorer, was listed on the scoreboard.

Valencia had 10 shots at goal for their rivals, but none were successful. César Soto Grado served as the official.

We believe Valencia and Athletic Bilbao may not receive anything in return for their efforts in this situation. It will be interesting to see how this one turns out because it’s difficult to predict who will win.

Checking the betting prices for this game on the 90 min. result market, a victory for Valencia is available for 2.73, a bet on a drawn result is 3.2 & betting on the winner to be Athletic Bilbao is 2.7. They are the top returns on offer as of now. 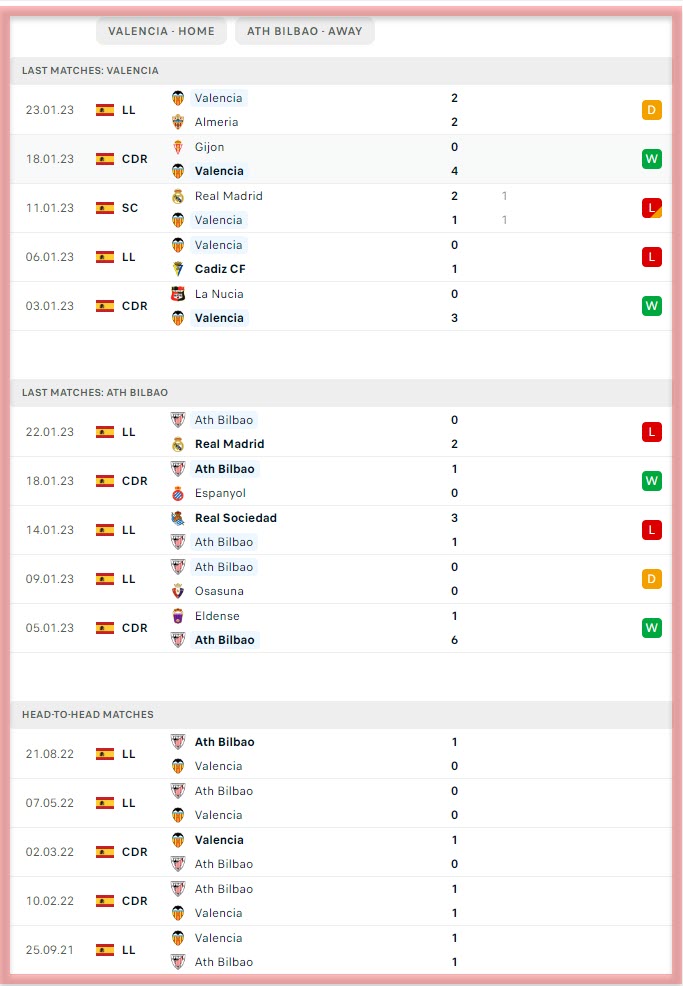