Union vs Fluminense – Preview and Prediction

Union vs Fluminense – Union has had a good start to the Sudamericana season. They have won all of their games to take the top spot in the table. Their offensive and defensive lines appear to be solid.

In their most recent Sudamericana match, Union defeated Oriente Petrolero 2-0 at home. With the victory, they have now gone four games without losing in the competition. They’ll be trying for a fifth straight win.

Fluminense, on the other hand, has had a mediocre season thus far. They won two, drew one, and lost one to finish in third place on the table with seven points. If they want to stay in the safe zone, their inconsistency cannot be allowed any longer in this competition.

Fluminense won 2-1 at home against Junior in their most recent Sudamericana match. They had gone two games without winning before claiming the aforesaid victory in the competition. As a result, they’ll be hoping to make that win matter in order to establish some consistency.

Their sole meeting this Sudamericana season was in the reverse fixture of the group stage matches. The game concluded in a scoreless tie.

In all competitions, Union has won seven of their last ten home games. The three winless recordings of the ten home games came in the previous five appearances. This Sudamericana season, they won one and drew one of their two group matches.

Fluminense, on the other hand, has been unreliable on the road. They have lost three of their last five road games in all competitions. Each of their two on-rod group matches resulted in a loss. They also conceded three goals in both of those games.

After reviewing the above recordings, we’ve decided to endorse Union to win their Sudamericana match against Fluminense on Thursday.

Union vs Fluminense – Head To Head 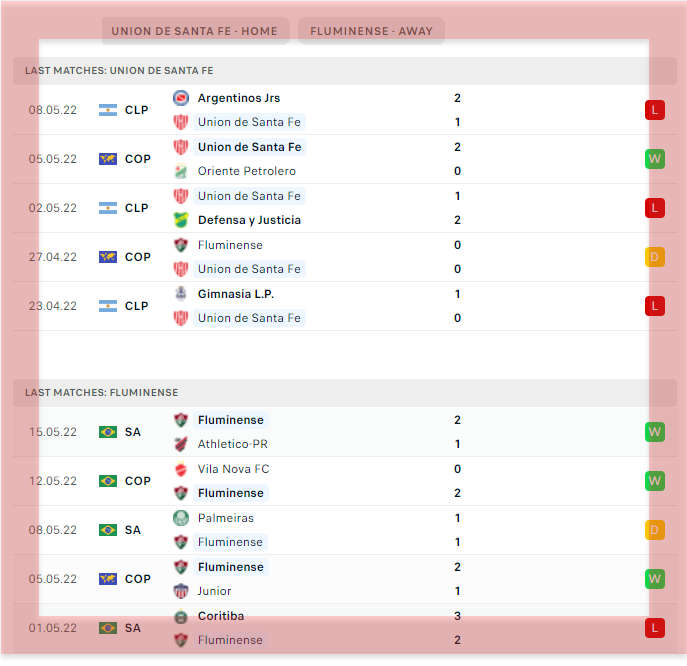