Union St.Gilloise vs Royal Antwerp – Union Saint-Gilloise will host Antwerp in the last round of the Championship Play-Offs, where the title race will be decided. This Sunday, these two clubs will face off at Stade Joseph Marien. Royale Union SG beat Anderlecht 2-0 on Sunday to end a three-match losing streak and carry the title battle into the last day of the season. The hosts are now in second place with 46 points from five games, only three points behind Club Brugge. They will not be eliminated from the second round of the UCL qualification.

In five of the last six games in which Union Saint-Gilloise has played, fewer than three goals have been scored each game. In terms of goal distribution during that time, opposition teams scored a total of four goals, while the hosts scored five.

Antwerp, on the other hand, has never won a Play-Off game. With five games under its belt, the team has lost four and drew one. They are currently in last place in the Championship table with 33 points. They’ve already advanced to the Conference League Playoffs, and this game won’t change that. Antwerp had previously lost their third consecutive game, 1-3, to Club Brugge. They have the poorest goal ratio in the Play Offs, scoring only twice and surrendering ten goals in five games.

The promoted team had been unstoppable all season, but a wobble at the final hurdle looks certain to gift the title to incumbent champions Club Brugge unless both final matchups go significantly in their favor. Union Saint-Gilloise needs Club Brugge to lose at Anderlecht, who have a good record against the leaders, and they also need as many goals as possible against Antwerp at home.

It’s miraculously conceivable, and it’ll be the most exciting Belgian Pro League final in years. The visitors have lost four of their past five league games on the road, therefore we expect the hosts to win this Sunday. 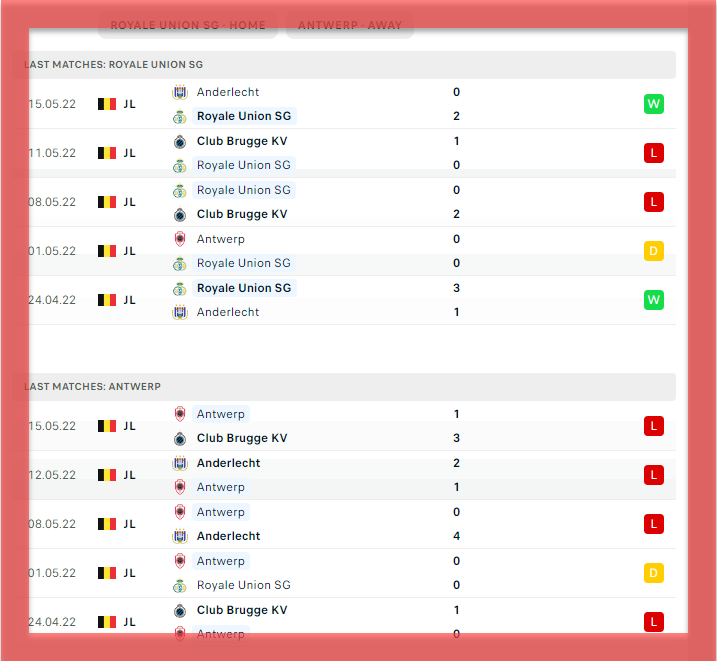 Our Prediction : Away To Win