Union Berlin vs Mainz  – Union Berlin will try to get back on track against fellow European contenders Mainz 05 on Saturday after three straight losses without scoring a goal.

Because the clubs have been on opposing paths for the past few weeks, they are currently tied on points in the Bundesliga table before facing off at An der Altern Forsterei.

Union Berlin and Mainz are levels on points in the top half of the Bundesliga standings heading into their match on Saturday afternoon at Stadion An der Alten Forsterei in the 24th round of the season.

The sides will enter the game in diametrically opposed moods, having earned zero and seven points in the previous three rounds, respectively.

Union Berlin will be hoping to end a three-game losing streak on this occasion. Urs Fischer’s team has lost their attacking edge in recent weeks, as they have failed to score in three consecutive league games.

The issue for Mainz, however, is their poor performance on the road. In the last seven Bundesliga away games, the side led by Bo Svensson has lost six and drawn one.

Can they exploit the momentum gained from their massive win against Bayer Leverkusen to end their terrible away record against an out-of-form Union Berlin side?

Following his team’s troubling run of defeats, Union coach Urs Fischer may make at least a few of changes, as center-back Robin Knoche returns from suspension, with Dominique Heintz most likely to make way due to a knock.

Meanwhile, Jeremiah St Juste is the only definite injury absentee for Mainz, while backup goalkeeper Finn Dahmen is currently dealing with an ankle problem. 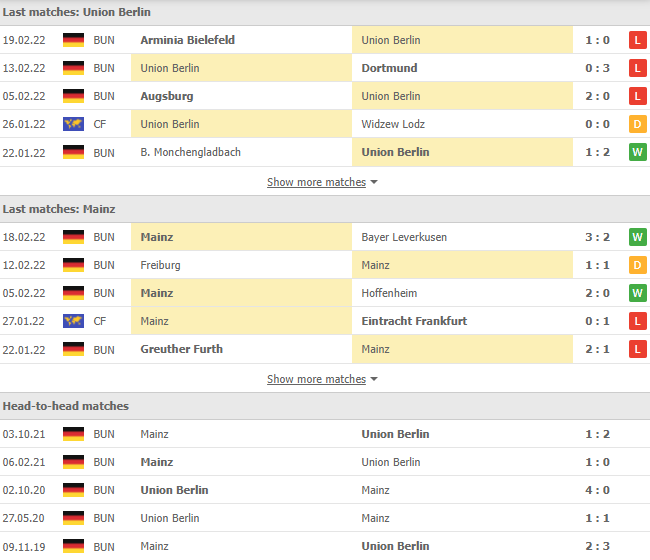