Union Berlin vs Eintracht Frankfurt – Union Berlin improved their prospects of qualifying for Europe next season after defeating FC Koln and Hertha Berlin in the final two rounds.

Urs Fischer’s men were particularly impressive in last Saturday’s 1-4 thrashing of Hertha Berlin. Eight days before, they had as much as 13 shots on target against city rivals.

Union Berlin also had four different goal scorers on the day, all of whom were attacking-minded players.Union Berlin and sixth-placed Hoffenheim are now tied on points.

Eintracht Frankfurt will play at Stadion An der Alten Forsterei on Sunday afternoon. When they play there, they’ll be trying to keep their winning streak going.

The visitors were in action on Thursday night, when they traveled to Barcelona to face the Catalan giants in the UEFA Europa League semifinal rematch at Camp Nou.

In the domestic league, Eintracht aren’t having the best of times right now. They haven’t won in three league games in a row, including a 1-2 home loss to Freiburg last Sunday.

This is why we believe Union Berlin has a good chance of winning, especially given their track record at Stadion An der Alten Forsterei.

They’ve won six of the last eight games against Union Berlin, making them the most dominant team in the history of this meeting.

At least three goals were scored in each of these eight head-to-head matches. The run includes a 2-1 win over Eintracht Frankfurt at Deutsche Bank Park earlier this season.

Last weekend, Union Berlin destroyed Hertha Berlin 1-4 on the road in the city derby, giving them one of their greatest performances of the season. We anticipate them to beat Eintracht Frankfurt after this performance.

Frankfurt recently came off a tough game against Barcelona three days ago, and they will head to the capital without a win in three league games. The odds on a home win are 2.15. 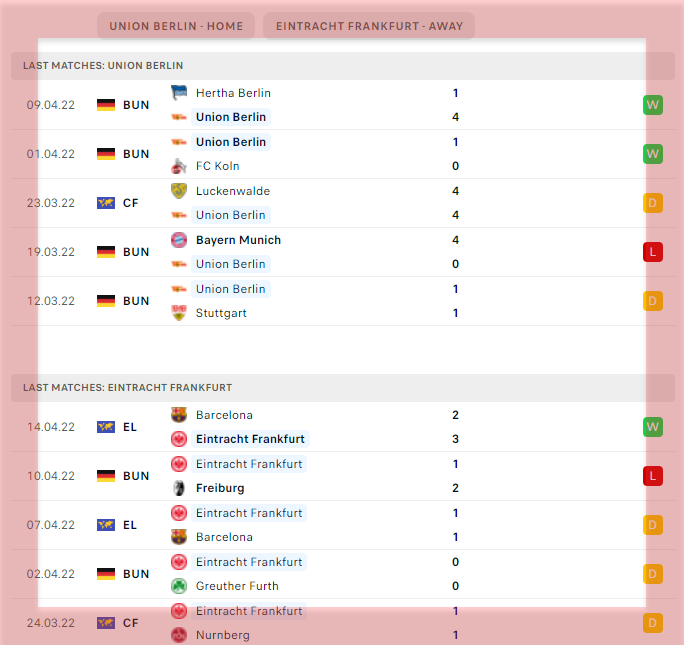