Udinese vs Spezia – Preview, and Prediction

Udinese vs Spezia – Spezia is still in danger of relegation, and their recent performances indicate that they are also under pressure. They’ve been on a long losing trend and are allowing a lot of goals. They are currently ranked 16th in the table, four points ahead of the relegation cut-off. And, with two more matchdays left in the competition, they only need one more win to mathematically clinch their survival.

The form of the two teams below them, particularly that of Salernitana, concerns them the most. In this situation, the team’s best bet is to try for the win this weekend at all costs, avoiding putting themselves in a difficult situation for the last matchday of the season.

Meanwhile, Udinese are securely positioned in the middle of the league and are experiencing a bad run of form. They have nothing to lose, and their seeming lack of danger has allowed them to relax. They have shed a lot of points in recent weeks, and they are also allowing a lot of goals.

They are, however, at home, and will be eager to give their adoring fans a fitting send-off with a thrilling victory. As a result, we should expect them to go for the three points immediately away. Expect plenty of goals when these two meet at the Dacia Arena.

Udinese were held to a 1-1 tie by Sampdoria on the road on matchday, and they had lost four of their previous five games. It’s also worth noting that they’ve lost their last two home games and haven’t kept a clean sheet in their previous seven.

Spezia, on the other hand, was defeated 1-3 at home by Atlanta last week, and they are now on a four-match losing run. They have also lost four of their previous five road trips and were winless in eleven of their previous thirteen overall games. Expect goals from both ends of the pitch as these two sides face off in the season’s penultimate contest. 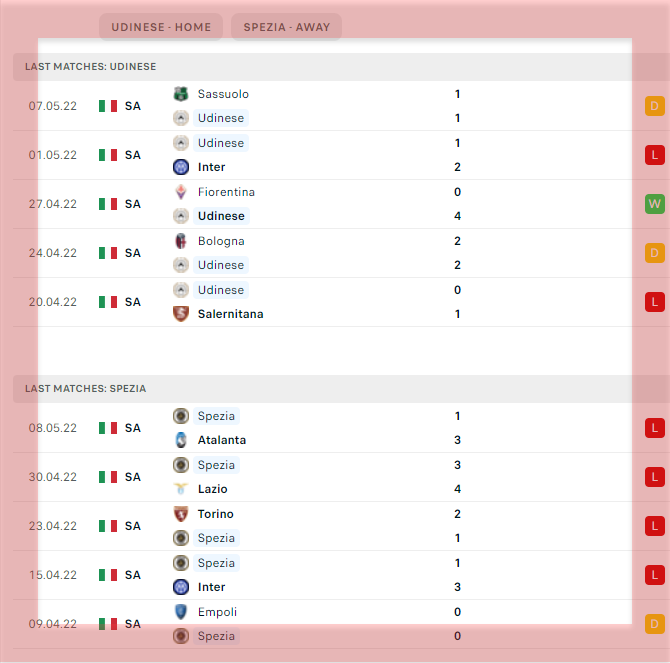