Twente vs Groningen – Preview and Prediction

Twente vs Groningen –  On Wednesday night in the Eredivisie, Twente and Groningen play at De Grolsch Veste. The Tukkers hope to take advantage of the fact that the visitors are struggling and have lost their last 5 games in a row.

With 62 points from 32 games, FC Twente is in fourth place in the standings. In the league, they won 18 games, tied 8 games, and lost 6 games. The home team has a strong attacking front that has scored 50 goals so far, but their defense has been bad and they have given up 36 goals so far.

After losing to Fortuna Sittard by a score of 1-2 in their last league game, FC Twente will be looking to do better here. They haven’t had any trouble scoring. In the last six games they’ve played, they’ve scored every time.

Groningen, on the other hand, has 36 points and is in 10th place on the table. They won 9 games, tied 9 games, and lost 14 games out of the 32 games they played. Groningen’s players are only thinking about their summer break because they have lost their last 5 Eredivisie games.

Groningen’s last game was a 1-2 loss to Sparta Rotterdam, which was their fifth straight league loss. This visitor’s Eredivisie season is made up of three straight losses in both halves and at the end. Even worse, they have given up more than one goal in each of their last nine away league games.

Groningen, on the other hand, hasn’t won a league game away from home in the last two. They have also lost five league games in a row.
Groningen has little to play for, so a strong Twente team shouldn’t have much trouble beating them this week. So, we think that the home team will win on Wednesday.

Twente vs Groningen – Head To Head 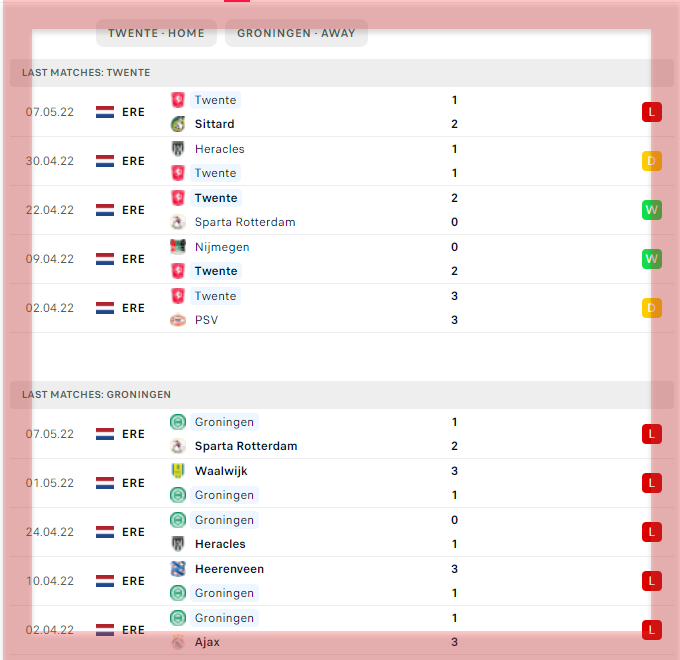