Turkey vs Luxembourg – Preview, and Prediction

Turkey vs Luxembourg – Turkey currently holds the first slot in the group and has a perfect winning record. They are obviously in a great position to get promoted to the higher level. They will be the overwhelming favourites to defeat Luxembourg this Thursday in front of their home crowd.

Currently, Luxembourg is ranked second on the standings. However, it should be noted that their only two victories in the competition were against the two teams who finished last and third.

They obviously struggle against stronger opposition, and they have already lost a game against their opponents for the day, the Turks. Additionally, despite finishing second lowest in their league and only having one win to their credit, they were unable to secure a place in the Euro 2020.

Turkey, which placed second in their table barely below France, earned a ticket to the Euros in the meanwhile. In fact, they were only two points behind the world champions at the time.

Additionally, they boast an undefeated record in this Nations League group and have never allowed a goal to enter their nets. They have 14 goals in four games, so it goes without saying that they are confident going into this Thursday’s game at home.

They only need a draw to guarantee their promotion, therefore we can anticipate one of their best Nations League performances this year. They also have a strong history of victories over this competitor in head-to-head matches. Due to these factors, come Thursday, Turkey is predicted to win.

Turkey won the most recent match 0-2 against its opponent. They have dropped their last four games. In three of their previous four matches, they scored two goals or more. They haven’t lost to this opponent in 50 years.

Turkey is currently on a four-game winning streak during which they have scored 14 goals. Additionally, they had won 10 of their previous 13 games overall and had suffered only one home loss since June of 2021. This team’s lone setback was to Italy, the current European champions.

On the other hand, Luxembourg had lost 16 of their previous 21 games overall, going on two distinct three-game losing streaks and two separate two-match losing streaks during that time. Due to these findings and Turkey’s strength in head-to-head matches, anticipate them to win this Thursday.

Turkey vs Luxembourg – Head -to- Head 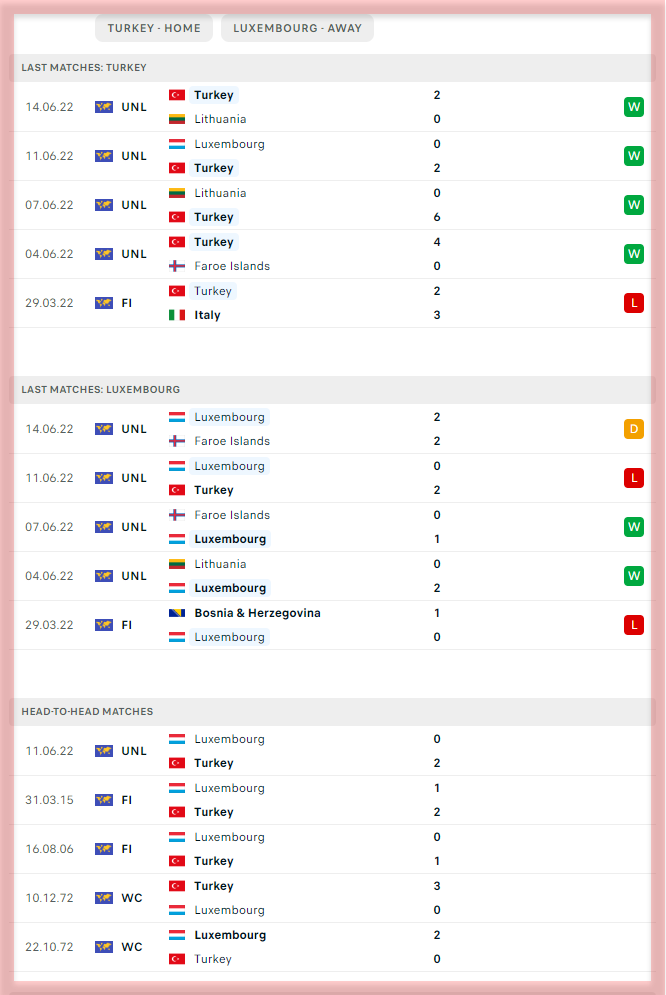