Turkey vs Lithuania – Preview, and Predictions

Turkey vs Lithuania – Lately, Turkey has been in good shape. In recent World Cup Qualifiers, they have typically gone undefeated. Their most recent friendly match concluded in a 2-3 loss to the current European champions.

They’ve been putting up a good show lately. Turkey’s performance in the Nations League this season has been outstanding.

They continued their good trend by beating inferior teams like the Faroe Islands, Luxembourg, and Lithuania, scoring goals at a high rate to comfortably take the lead. Following such recordings, their spirits will be high.

Lithuania’s recent performance has been dismal. Their performances are patchy at best, and they haven’t won in a long time.

They frequently concede undesirable outcomes, as we can see. It’s possible that their bad performance will not yield any positive results. Lithuania has lost every match in this season’s Nations League.

They have been leaking goals in an alarming manner and are already comfortably occupying the bottom slot in Group 1. They don’t appear to have anything competitive.

This will be only the second time these two teams will face off, and this season’s lone head-to-head match occurred in the reverse fixture of the Nations League.

Turkey won the match 0-6 on the road, which was a hugely motivating result. Turkey’s domestic form has improved recently. They are largely unblemished in this venue, with the exception of a friendly loss to Italy.

In their first home encounter of the season, they defeated Faroe Islands with four unanswered goals. The second will be the forthcoming match versus Lithuania, who is now in last place.

On the other hand, Lithuania’s sole recent road victory came in a friendly match against San Marino. On the road, their most common outcome is a negative show.

We can anticipate them leaking goals at a high pace, like they did in the reverse fixture. As a result, we have no choice but to endorse Turkey to win their Nations League match against Lithuania today. 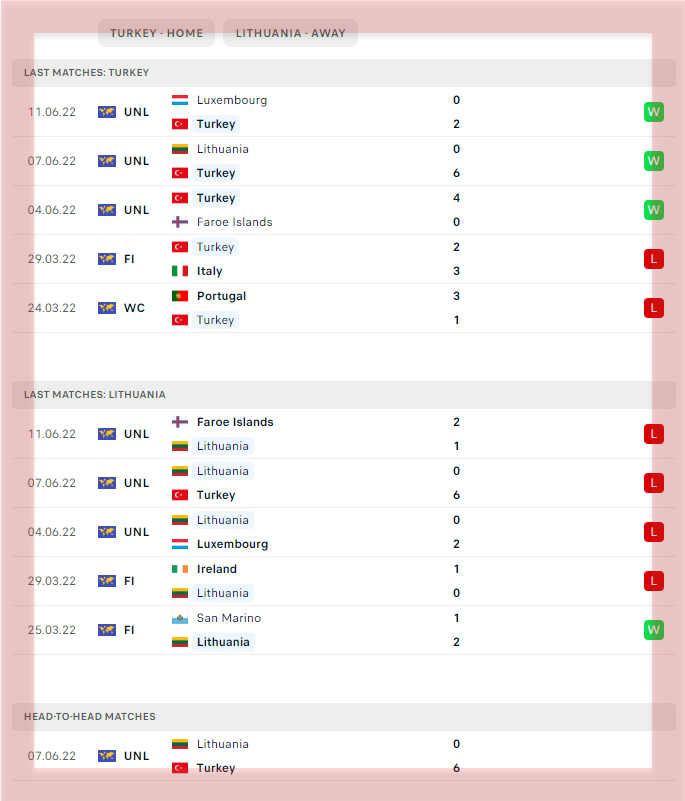 Our Prediction: Both Teams to Score: No